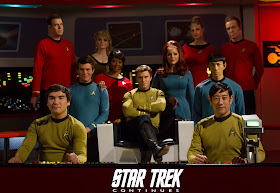 Have you discovered Star Trek Continues yet? The fan made series expertly reproduces the qualities of The Original Series, with remarkably fidelity not just to sets and costume, but lighting and style. It also follows the best of Trek in its thoughtful and smart stories, which I would rate as not just the very best fan productions, but comfortably among the best episodes of all Star Trek.

There have been three episodes (and a few shorts) so far. The first, Pilgrim of Eternity, is a sequel to Who Mourns for Adonais?, with Michael Forest reprising his role as Apollo. The second episode, Lolani, is an entirely original story, focused on the titular Orion slave girl, used to explore issues of slavery and sex trafficking. And the most recent is Fairest of them All, a sequel to Mirror Mirror, picking up right from the end of the original episode and depicting Spock's rise to power.

The Star Trek Continues team are already at work on their next episode, and have been running a Kickstarter campaign to fund further and expanded production. There's just a few hours left on that, but as you'll see if you watch the episodes, its certainly worth your support, this series is amazing Star Trek. The campaign has already exceeded its initial $100,000 goal, to fund two further episodes, and proceeded to exceed stretch goals to fund the building of engineering and planet sets. Further additional funds will secure even more episodes! You can add your support, on Kickstarter.

And continue after the jump to check out all those brilliant episodes: