At the Toy Fair over the weekend Diamond Select Toys revealed several new releases in their Star Trek range.

Two ships will be coming to their electronic starship model collection. There will be an entirely new TOS Romulan Bird of Prey. This was on display, but photography was not permitted (you can see a nacelle in one of the photos below though). DST like there variants, so I wouldn't be too surprised if we saw cloaked and/or battle damaged versions at some point too.

They will also be a re-issue the Enterprise NX-01, which was the first ship in the collection back when Art Asylum released it in 2002! The most recent release of the model was in 2006, in a mirror universe variant, and there has also been a battle damaged version before. The new version has had a much needed upgrade to the paint job, with a more subtle finish on the aztecing, and some of the previously missing details now filled in. Images here via Toy Ark: 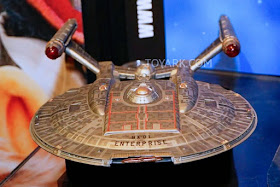 DST also had some new prop releases on display, including their first ever TNG phaser. Continue after the jump to check those out: 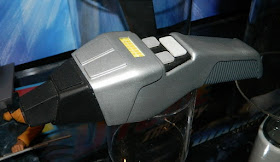 On display alongside the TNG phaser were Search for Spock phasers. The standard one of these is due out in March, but it appears DST will also be issuing a variant, as you can see in the mages below (eyes peeled for that Bird of Prey too). Image above from Figures.com, below from Toy Ark and Comic Book Resources: 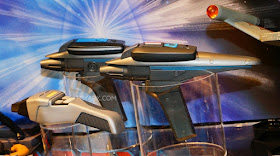 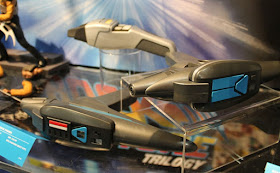