The next issue of John Byrne's New Visions photo-comic is due out next month, be he's already got stories and plans for issues that will take the bimonthly(ish) series well into next year. As ever Byrne has been posting regular updates on his work in progress on his own forums, giving clues of stories to come and insights into his process creating these unique comics.

A while ago Byrne teased at the possibility of a Gary Seven issue in the series, and has now confirmed that will be going ahead, and naturally it will be issue seven! Here's a page from that issue (work in progress) featuring Kirk, Seven, and a mysterious alien ship: 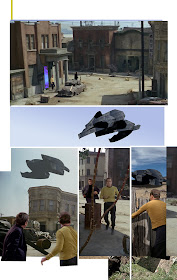 Apparently the issue will also include rooftop chase, and it seems a visit inside that alien ship, as Byrne also posted this preview of a virtual set of the interior: 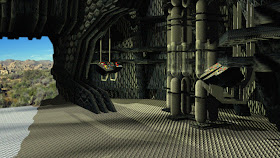 Byrne's Gary Seven Assignment: Earth series is perhaps my favourite of his Star Trek work, so I'm delighted for another Seven adventure. But I'm also a huge fan of the Pike era (which Byrne has also previously touch on in his Crew series), so I'm equally pleased that the fifth issue, A Scent of Ghosts, is set to take us back to that earlier time on the Enterprise. Continue after the jump for a peak at that issue, and more hints of things to come in the series. 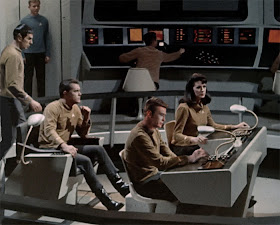 Byrne posted a small excerpt from the Pike issue, and gave some notes on his casting choices:


I'm bracing for some exploding heads among those who insist we started on Day One of the Five Year Mission, and everybody but Chekov (and possibly McCoy) joined the ship then. Spock was already there, of course.

Kinda made sense to me that others might have been aboard before Kirk, too. Scotty seemed logical. And there was a more prosaic reason for using Kelso: Paul Carr had signed off on the use of his likeness, but Peter Duryea had not.

As well as manipulating stills from the series, Byrne has also been making use of virtual sets, both to create new environments, and give him more flexibility in portraying familiar locations. Another tease posted on his forms was this awesome realisation of the "teleportation chamber" that featured in early issues of the Gold Key comics:

Byrne hasn't got this worked into an issue yet, but hopefully he'll find a way to make use of the retro design.

Something that surely will be well used in the series is engineering, which is why Byrne has been building that too. Here's one view of his virtual set: 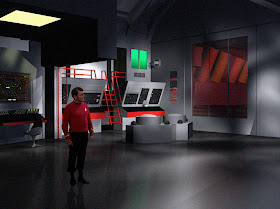 You can see many more views of the virtual engineering set, and much more taking us behind the scenes of the photo-comic series, all the way back to the inception if you want to read back enough, on John Byrne's forums.

The next issue, A Scent of Ghosts, is due out in March. That takes the series a month behind its previously bimonthly releases, so it's not entirely clear when we should expect following issues. But when they do come, issue six will be Resistance, featuring the Borg! And then issue seven will be the Gary Seven issue, which might be called 1969, if Byrne has kept the title he used in his previous teaser image.