Books news! Starting with a very snazzy new cover, by Alan Dingman, and released by StarTrek.com, for Crisis of Consciousness, the TOS novel by Dave Galanter, due out in May. 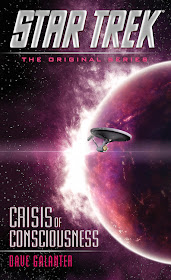 
The crew of the U.S.S. Enterprise is completing a treaty mission with the Maabas, a peaceful alien race not native to the star system they currently inhabit, as descendants of refugees from a great war long ago. Several hundred thousand Maabas once took shelter on their new world, and have now been here for mil­lennia. They do not travel the stars, but seek to explore from within. The Federation’s interest is in the Maabas’s great intellec­tual resources—their science, while behind in some areas, excels in others, and their philosophy is in line with that of the Federa­tion. But just as the pact is signed, the Enterprise is attacked by an unidentified vessel. Enough force is shown to keep the alien assailants at bay, but a new danger arises. Their mysterious foes are the Kenisians—a race that used to inhabit the Maabas’s chosen world thousands of years ago, and who now want to take it back.

Continue after the jump for more book news from the 23rd century:

Also set to expand the USS Enterprise's five year mission, is James Swallow, who also has a TOS novel on the way. It wont be coming until at least some time next year, but Swallow has now revealed, on his blog's Coming Soon page, the title, The Latter Fire. When he previously spoke about this book he highlighted a few episodes to indicate the tone he will be going for, namely The Doomsday Machine, The Enterprise Incident, and The Immunity Syndrome.

Elsewhere in the 23rd century, Cross Cult have now confirmed they will be producing German translations of at least the first two Seekers books, although they've not scheduled them yet. 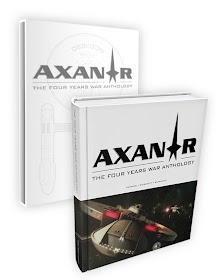 Finally, something unofficial but most intriguing. The popular and very impressive Axanar fan film is set to have a tie-in book! Producer Alex Peters announced on the Facebook Axanar Fan Group that Axanar: The Four Years War Anthology will be released, including stories by regular Star Trek authors:


I cannot tell you all how excited I am to present to you a project that you will all love. Axanar: The Four Years War Anthology. A collection of 6 short stories, one on each character in Prelude to Axanar written by current Star Trek authors and NY Times best selling Sci Fi authors. The stories will be set during the time of the war and help inform each character who you will see in Axanar. Stay tuned for details.

And that's all for today. To stay up to date with all the latest book releases, hit the books or prose buttons on top of my schedule page, for details of all the forthcoming titles and links to all my previous reports.