GameSamba have announced details of their new Star Trek browser game, including the title, Alien Domain. The game will focus on Federation and Klingon exploration of Fluidic Space, the home of Species 8472, and is set for launch later this year. GameSamba gave an overview of the game in their press release:


Set in the mysterious extradimensional realm of Fluidic Space, players will make strategic decisions to maintain control over limited resources, balance defensive spending with research, establish colonies, and prioritize power distribution for optimal efficiency. Players will also have the option to participate in PvP encounters such as one-on-one skirmishes, raids against player-controlled outposts, and large-scale, guild vs. guild Alliance Battles.

Taking place after the most chronologically recent Star Trek canon and featuring a new Star Trek story, players will control a variety of starships and technologies native to their chosen faction. Starships include Constitution-class and Defiant-class starships for the Federation, and D7 Battle Cruisers and Bird-of-Prey for the Klingon Empire. Players will even be able to craft and pilot unprecedented super starships created through emerging technologies. Creating a diverse starship fleet is essential for exploring the deep reaches of Fluidic Space and quelling its threats, as well as for defending against rival colonies and players.

Several in-game screen-shots have been released. Continue after the jump for a look at space and ground based game play:

These first few images show the space-based aspects of the game, including battles between Federation and Klingon forces, and what looks like a map of Fluidic Space: 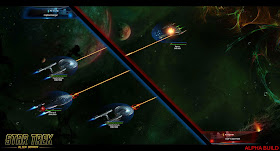 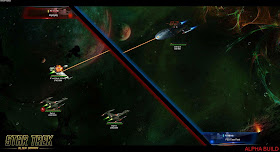 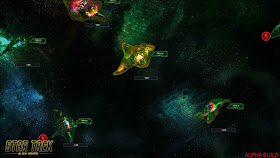 This next batch appears to show ground-based facilities, again from both the Federation and Klingon Empire:

Images via StarTrek.com, GRY Online and Sector. You can also find additional art from my previous article when development of the game was first announced. There's not much to see yet, but if you'd like to follow the game, you can head to the website, Facebook page, and Twitter.