Due out in December is a new TOS movie-era novel from Greg Cox, Foul Deeds Will Rise, which is also a sequel to the episode The Conscience of the King. StarTrek.com have now revealed the cover for the book, which was created by Joe Corroney; an artist more often associated with Star Trek comics, having produced covers and interior illustrations for numerous IDW titles. 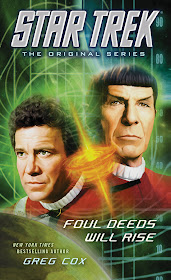 
2288. The U.S.S. Enterprise-A is on a vital peacekeeping mission in a remote solar system beyond the boundaries of the Federation, where two warring planets—Pavak and Oyolo—are attempting to end years of bitter conflict. Crucial peace talks are being conducted aboard the Enterprise, even as Starfleet weapons inspectors oversee the disarmament process. Losses and atrocities on both sides have left plenty of hard feelings behind, so Captain James T. Kirk has his work cut out for him, even as he unexpectedly runs into a disturbing figure from his past: Lenore Karidian.

Twenty years ago, the deadly daughter of Kodos the Executioner tried to kill Kirk, but she has since been declared sane and rehabilitated. Kirk wants to give her the benefit of the doubt and a second chance at life, but when a mysterious assassination threatens the already fragile peace process, all clues point toward Lenore—and the future of two worlds hangs in the balance.