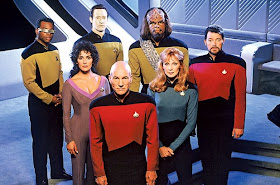 But alas only as a funny book. Still, that's exciting in its own right! Coming from Gallery Books in March next year (in trade paperback and ebook) will be Star Trek: The Next Generation - Warped, An Engaging Guide to the Never-Aired 8th Season, by Mike McMahan. The book will be based on McMahan's TNG Season 8 Twitter, as the blurb posted by StarTrek.com explains:


On Twitter, Star Trek: The Next Generation lives on for one more season in the form of @TNG_S8—a satirical eighth season that never aired! Each tweet to its more than 85,000 followers (and retweeted four times that amount) is a hilarious recap and spot-on exaggeration of one of the most beloved TV series ever aired. Now, @TNG_S8 creator Mike McMahan presents an officially licensed mockumentary-style book-length “episode guide” to Season 8. With colorful illustrations by Joel Watson of the HijiNKS ENSUE webcomic, and Jason Ho, longtime artist at Bongo Comics (publisher of the comic book versions of The Simpsons and Futurama), each “episode” contains plot descriptions, trivia, aliens new and old, set photos, and behind-the-scenes looks at the troubled production. This book will appeal to casual and obsessive fans alike, keeping the world of the show intact while hilariously exaggerating it.

McHahan also commented on his aims for the book:


I thought it would be fun to create an artifact from an alternate version of our universe: a tongue-in-cheek guide to the production of an -- admittedly silly -- season of TNG. I had a great time taking the tone of the jokes in @TNG_S8 and applying them to the expanded format of a guide, which gave me room for crazier episodes, dialogue, trivia, and plenty of Riker. I hope fans enjoy laughing with Geordi, Data, Worf and good old Barclay as much as I enjoyed writing their antics.

Continue after the jump for some samples of the tweets that inspired the book, and a look at the previous Star Trek art from the contributing artists:

Based on the tweets this book should be both amusing an imaginative, here a just a few that caught my eye:


Spock visits the Enterprise to give Data a special gift. Geordi's miffed that Spock never remembers who he is, gets real pouty about it.
— TNG Season 8 (@TNG_S8) October 28, 2013

A holodeck error populates the Enterprise with ice age beasts. Barclay gets trapped in the dividing hallway as the saucer section separates.
— TNG Season 8 (@TNG_S8) April 17, 2013

Wesley's nanobots are dying, filling the Enterprise with grey sand. An hour into his wedding, Geordi realizes his bride is a hologram.
— TNG Season 8 (@TNG_S8) February 26, 2013

And I could go on... But instead lets look at the artists! Both have plenty of geeky art under their belts including many previous Star Trek images. Here are a couple of Joel Watson's Star Trek strips from Hijinks Ensue: 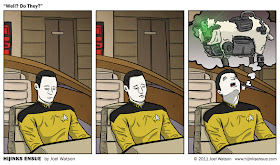 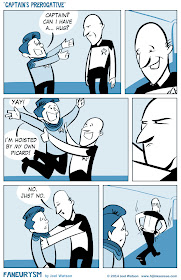 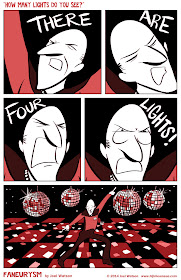 And here is some of Jason Ho's Star Trek art: 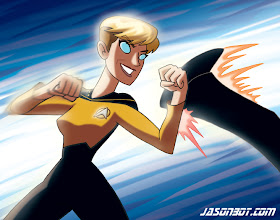 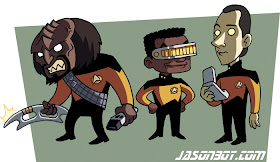 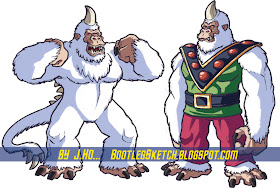 I think this should be fun!