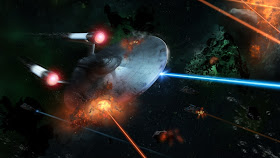 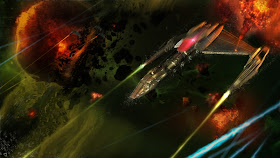 A new online Star Trek game has been announced by developer NGames. Seemingly titled simply, Star Trek (for now at least), the new game is set to take players into Fluidic Space, playing as either Federation or Klingon forces at odds with each other while both also fend off Species 8472. Tthirteen1 reported details so far announced by NGames, including this summary of the game's setup:


Ever since the USS Voyager returned and told tales of Fluidic Space, the Federation has tried and failed to return. All efforts were in vain, until an unexpected turn of events – a Galaxy-class explorer ship suddenly received a short message, informing them they were originally drew into Fluidic Space by an unstable wormhole. Better yet, the ship sending the message has built an outpost and stumbled upon a crystal of unlimited potential power.

Armed with the knowledge of how to enter Fluidic Space, the Federation immediately sent a reinforcement fleet filled with supplies, top researchers and trained combat forces to retrieve the ship. However the Klingons intercepted the Federation’s information and sent ships of their own, sneaking into the wormhole entrance as it opened.

The Federation and Klingons soon came face-to-face in Fluidic Space, sparking constant conflicts throughout exploration. As a result, war is on the verge of breaking out.

Even worse, a terrifying enemy is quietly lurking deep in Fludic Space, watching the Federation and Klingons – Species 8472, waiting for the perfect time to pounce on their new enemies with deadly force…

The game is to be hosted on Game321.com, who already have a collection of browser based and mobile games available. The new Star Trek game will be a strategy game (sounding not dissimilar to my all time favourite, Star Trek: Armada), with a focus on base and fleet building, exploration, technological development, and starship combat. As NGame describes:


True to Star Trek, players build a variety of starships and create immense fleets to take into battle. Constitution-class, Defiant-class, the Bird of Prey and D7 starships are all available, as well as unprecedented super starships created with the help of brand new technologies. Fleets are essential for exploring deep space, defeating weird and wonderful monsters, attacking enemy planets and intercepting plunder ships. A good starship captain is a must!
Who knows what secrets will be discovered while exploring Fluidic Space. Whatever they may be, Species 8472 is determined to ensure nobody ever finds them!