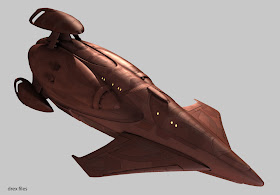 A few days ago we had a look at Doug Drexler's concept for a 20th century Vulcan ship for the episode Carbon Creek. Alas that design wasn't used in the final episode, so I thought it would be a good time for the Drex Files in Exile to look at the design that did make it to Earth to collect T'Pol's second foremother. Here's what Doug had to say about this suitably retro looking space-age ship:


The D’Vahl exhibited a rotund penquiny quality fused with the Vulcan lander from “First Contact”, and Chesley Bonnestell’s moonship from Destination Moon. Most notably seen in “Carbon Creek”. The model was later re-used in “Storm front II” where it appeared as one of the welcoming ships in orbit of Earth and in “Kir’shara” and “Awakening”.

Continue after the jump for more views of the ship, and a look at it in action in Enterprise episodes: 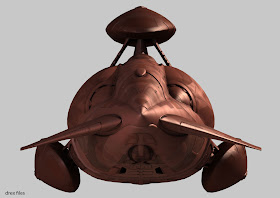 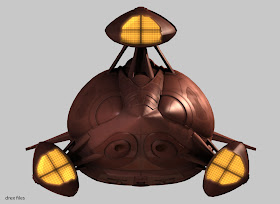 The ship first appeared in Carbon Creek, in an ET-esque rescue of Vulcans stuck on 1950s Earth: 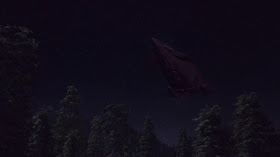 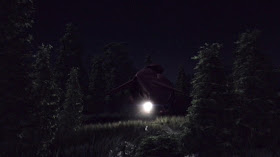 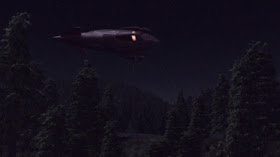 Ships of the class were seen again in the 22nd century, most prominently in the episode Awakening, when two of them fired on an Enterprise shuttlepod. More were seen in the following episode, Kirshara, as part of a Vulcan fleet. 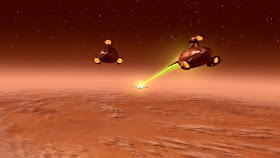 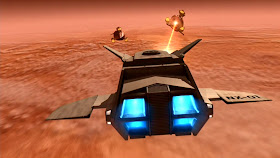 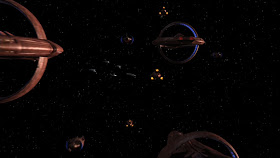 Come back soon for more reports from the Drex Files in Exile, including more ships from the Vulcan fleet, among many other topics. Meanwhile for more Drex Files, check out our index page here on The Trek Collective. And for more from Doug, you can befriend him on Facebook, where you'll find lots more from his work on Star Trek, and more.