Books news! Starting with confirmation from David R. George III that he is under-way on his next Star Trek novel (the next one after June's The Lost Era: One Constant Star that is). David didn't reveal any more information beyond the fact he is a writing a book, when he announced the news on Facebook. 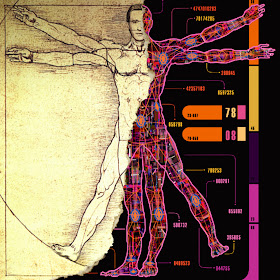 In contrast, Jeffrey Lang has been spilling many a bean about his forthcoming post-Cold Equations Data novel, Light Fantastic. Lang has recently started a new blog. In his second ever post he recounted the tale of how Margaret Clark talked him into returning to Trek to write the book, and in the following post he discussed what he has in store for us in that book. A few highlights below, but get the full story on Lang's new blog. Lang describes his concept for the book as "an Ocean’s Eleven-type caper story, with Data in the Danny Ocean role", and highlighted the following in his summary of what to expect:


1.) This is not a shipped-based story. The Enterprise-E puts in a brief experience, but the majority of the zipping around the aether is aboard Noonien Soong’s Archeus, frequently piloted by the incorporeal Shakti (who quickly became one of my favorite characters).

2.) Following on point #1, Data is no longer a Starfleet officer. David Mack was already pointing him in that direction at the end of Cold Equations and I heartily endorse the idea. Data out of a uniform is much more interesting than Data in a uniform (except you can’t find any damned pictures of him! More about that later). I also decided to return Data (at least temporarily) to the world that his father, Noonien Soong, left him when he expired. Data as a casino owner: Just let that idea roll over you for a bit. If you do, you’ll understand why I had trouble following through on the Ocean’s Eleven plot structure.

3.) Lal is a major character. The Offspring was one of my favorite episodes of Next Generation when it was first broadcast and, I’m happy to say, really stands up today. It was a sad, smart tale and Lal was played beautifully by Hallie Todd. Probably the most impressive thing about the episode is that they didn’t go for cheap sentimentality at the conclusion and have Data express grief. He couldn’t express grief — that’s the point — or (as I’ll argue in the book) not in a manner that humans would understand or easily identify.

I was very happy to bring Lal back and work out some of the mechanisms (you’ll pardon the expression) of her persona. She’s a complex character because she’s simultaneously very adult, very childlike, and very adolescent. Probably the closest thing any of us could imagine to living with Lal would be raising a genius-level intellect who also has some moderately serious emotional difficulties. Don’t get me wrong: Lal isn’t a basket case, but she’s fragile and needs to be managed carefully. So, pity poor Data who not only has to learn to handle his own newly-restored emotions, but also the extremely complex emotional landscape of a simultaneously pre- and post-adolescent young woman. That’ll turn your hair white… Or skin golden…

4.) Moriarty is back. Now, honestly, if I’d had my druthers, I wouldn’t have mentioned this in the cover copy, as Pocket’s marketing department did, but I can’t deny it has had the desired effect. Apparently, a lot of TNG fans have wondered whatever happened to the holographic professor and his erstwhile companion, the Countess Regina Bartholomew. Well, now you’ll find out. And, I’m sorry to say, it’s not a happy story. The professor goes a little bit cray-cray (as my son would say), but once you learn some of the details, you’ll understand why and maybe even sympathize. A little. At first.

5.) And, because I couldn’t resist it and because it was sort of one of the hallmarks of Immortal Coil: guest stars, guest stars, guest stars! In IC, I tried to explore some of the history and ramifications of artificial intelligences in the Trek universe; in LF, I spend a little time with the beings lighter than air. No, not fairies (or faeries, if you’re Nancy), but holographic individuals. There’s more than a few out there, and, boy, some of them have reasons to be pissed off. I also find a way to insert a couple cameos for TOS characters because, why not? As previously asserted, you couldn’t swing a dead cat back in the old days without connecting with some form of A.I. who wanted to learn to love. 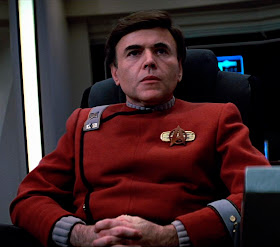 Also coming later this year is Greg Cox's next novel, Foul Deeds Will Rise, which he talked about recently on Trek FM's Literary Treks podcast. As has previously been established, the book will be set aboard the Enterprise-A, a little while after The Final Frontier, and will be focused on Kirk and Chekov. Cox also noted Doctor McCoy is reasonably prominent in the story. He gave this guess-the-episode summary of what the book is about:


This book, much life The Wrath of Khan, has Kirk dealing with some repercussions of stuff that happened back during the original five year mission. And for purposes of the plot, it was important that there be a passage of time. Twenty years have passed, and he runs into some people he has not run into in twenty years or so. And I needed for the plot, there to be a substantial time. And I also needed a somewhat older, wiser, somewhat more woeful, Kirk, such as we see in the movies. Perhaps more mature Kirk, who is going to have to deal with old issues, some very long buried old issues coming back to haunt him again...

Cox also revealed he is already in discussions for his next book, which will mostly likely be TOS as well. The rest of the interview was mainly talking about his recently published TOS/Voyager crossover, No Time Like the Past. One thing he revealed in that discussion was that the book almost became a lot more complex, with a plot involving more time travellers, and an appearance from the timeship Relativity. Ultimately he felt this was getting a bit too tricky and pulled it back to the still very time twisty adventure it became. The rest of the interview discusses the book in detail, so as ever I'd recommend reading the book first, before jumping into the spoiler-filled DVD-extra feature style discussion.