Another look behind the scenes at Into Darkness for you. Starting with another reason to glare at your inept bluray copy for not having enough extra features (see my review if you don't know what I'm referring to): As you might recall, if you get Into Darkness as a download via your Xbox, you are also able to experience additional content through the SmartGlass application, which lets you use mobile devices as a second screen to display behind the scenes imagery such as concept art. To announce this feature a range of the concept art on offer was released to the web a few weeks ago, and very appealing it looked too. But what was on offer gets even better, as apparently there are also deleted scenes connected to this release of Into Darkness.

TrekBBS user Cap.GRPrime1701 posted the following image, reportedly from one of these deleted scenes, which intriguingly appears to show a nuTrek version of the classic Constitution class, above Admiral Marcus' office (presumably another of his model starships): 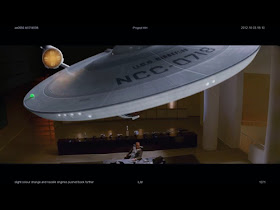 StarTrek.com also revealed the details of another cut scene, in an interview with actress Nazneen Contractor, who played Rima Harewood, the wife of the Starfleet officer who blew himself up in exchange for Khan curing his daughter:


There was a scene at the end of the movie, after the memorial service, in which Chris Pine (as Kirk) comes up to me and my daughter. He sees us, and my daughter is now healthy, with a full head of hair, and I thank him for his speech. He looks up at me and he knows who I am, and then he looks at my daughter, and they both have this moment where they know they share Khan’s blood. But it got cut.

Elsewhere behind the scenes, one the interface artists from OOOii posted the following video of their work from the film on Vimeo, giving us a good look at some of the displays from the film:

Another TrekBBS user, Locutus of Bored, posted a pretty comprehensive breakdown of all the easter eggs hidden in the above displays. You can also see more examples of the interface design from Into Darkness in another of my behind the scenes reports.

One of the designers from Into Darkness has also posted lots of work to his portfolio. Tex Kadonaga worked on the design of the USS Vengeance, as well as the trade ship and garbage scowl. Here are a few examples, including an early concept for the Vengeance bridge, with a greater focus on it being operated by a single person, and a handy scale image. You'll find a lot more on Kadonaga's portfolio. 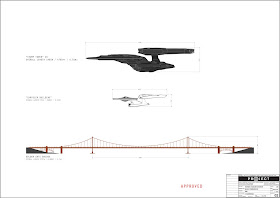 Finally, yet another resourcefully TrekBBS user, SalvorHardin, posted the following much earlier concept sketches of the USS Vengeance. I believe these are screencaps from one of the more elusive extra features on the bluray (more after the jump): 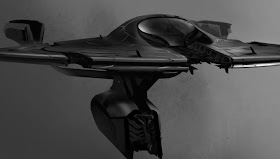 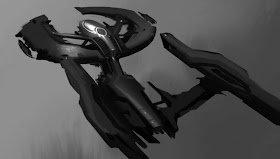 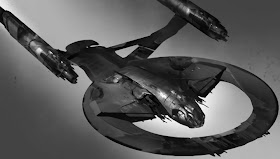 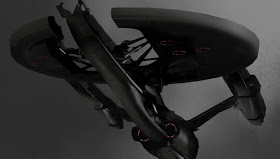 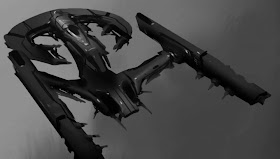