Titan ebook on the way 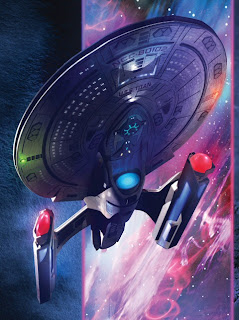 It would appear Simon and Schuster really are stepping up the Star Trek ebook series, as here's news of another one! Continuing to give a delightfully mixed assortment of stories, the latest addition to the series will be a Titan adventure, apparently with an emphasis on Captain Riker. The author John Jackson Miller, announced the new story, called Absent Enemies, on his blog, giving a few hints at what he'll be doing:


...Absent Enemies picks up in the "present day" of the post-NextGen literature timeline — and it is inspired by and in part picks up on the events of one of my favorite TNG episodes. I won't say which one yet, but for years, I had thought the episode held the potential for another story to be told — and I'm happy to get to do it here.

The episode that leaps into my mind when reading that, is Schisms. Any other guesses?

This will be Miller's first Star Trek work, but he's a well established writer, having done lots of sci-fi and fantasy before, including numerous Star Wars books. He did apparently almost get to write a Star Trek ebook before; his first ever prose pitch that got picked up was for a Corps of Engineers story, but the series was cancelled before he got to write it!

There's no news on when this will be out yet, but as the Star Trek books schedule seems to be done on an annual basis, I'd expect by the end of 2014 at the latest. Together with the recently announced Shadow of the Machine, by Scott Harrison (coming this December), and Michael A. Martin's Seasons of Light and Darkness (due next April), it would appear the ebook novella line is growing from one story a year (since 2011) to at least a couple a year. I rather hope we'll hear of even more stories, I'd love to them much more regularly; I really like the novella length, and the variety of stories we've got from the series so far.

All praise to TrekFM's Literary Treks for uncovering this news.