Several companies revealed new Star Trek action figures and sculptures at this past weekend's San Diego Comic Con. Here's a round up of all the new stuff:

Square Enix will be launching a new line of large-scale high-end action figures, they will be part of their wider Play Arts KAI range, which includes figures from numerous franchises, including Batman and Halo. Their first releases will be Kirk and Spock from nuTrek; they had prototypes of both on display at the Con. Toy News International posted this image of the highly detailed ten-inch figures. For a better look check out Toy News International and ToyArk's galleries. 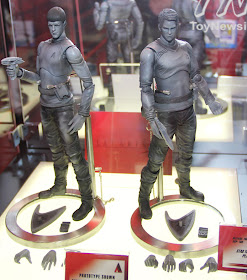 Kirk prime is also getting the big-figure treatment. A new twelve-inch Captain Kirk figure with a cloth uniform is coming later this year from Moebius. Figures.com posted the follow picture, and they too have a gallery where you can see more images of the captain: 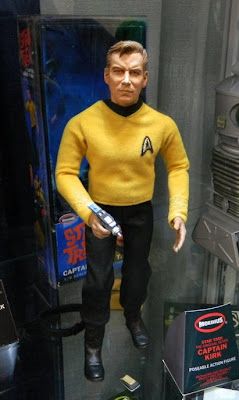 Also going for a retro look are Big Bang Pow! who are the latest company to join the Star Trek/The Big Bang Theory co-branding efforts, with a new range of Mego-style eight inch action figures. The range includes normal attire for most of the Big Bang Theory characters, while the four Big Bang Theory boys will also be available in TOS uniforms: 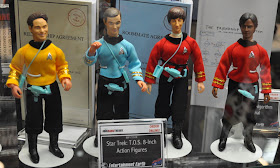 You can see more of Bif Bang Pow's displays on Action Figure Insider, and Figures.com. Among the other items there is the new TNG bridge bobble heads, with the whole crew revealed in their final form for the first time: 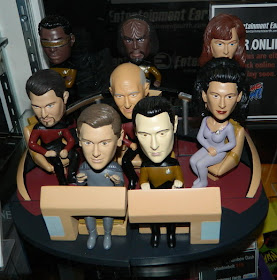 Wesley Crusher was released at the Con, the rest of the crew will be coming out once a month for the next several months. Entertainment Earth currently have listings for Riker, LaForge, and Worf.

Finally Titan Merchandise had their Star Trek Masterpiece Collection busts on display, including a newly revealed addition to the range, Mr Sulu, modelled after his foil wielding appearance in The Naked Time. StarTrek.com posted this image: 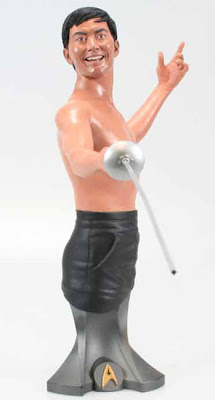 That's not quite it, I've already reported on several other figures: The new Skele-Treks figures, new figurines in Hallmark's Keepsakes range, and a new Mimobot character. Cubify also announced new additions to their 3D printed figurine range, which I'll be reporting on separately later.