Visions from Federation: The First 150 Years

Federation: The First 150 Years is just a few weeks away. Here are preview images posted by StarTrek.com, TrekCore, and Trek News, with comments from the author, David A. Goodman, from a recent StarTrek.com interview: 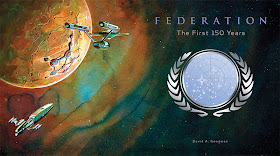 The point of the book for me was to never take a liberty that would bug me as a fan. So it never came up that I was taking too much liberty with the canon, because I was so focused on what was already established, and then both filling in the blanks and linking those pieces of history that were mentioned or dramatized in the shows. The bigger challenge for me was making obvious contradictions between the shows and movies not seem like they were contradictions. So for instance, in an episode of Star Trek: The Next Generation, Picard says that the Prime Directive was the result of a disastrous first meeting with the Klingons. But then in the pilot of Star Trek: Enterprise we see humanity's first encounter with the Klingons. It doesn't seem to support Picard's comment, but I looked at it and figured out a way that it could, and I think it makes a lot of sense, and tells an interesting story. Some things could not be completely resolved, like the fact that Kirk has never seen a cloaking device before "Balance of Terror," but those idiots on Star Trek: Enterprise used them all the time. I was one of those idiots, which is why I can say that. Though, again, I did my best to resolve this in a way that I think makes sense.

Here is one of the examples of filling in a gap, an ancient Vulcan document which seems to describe the sundering of the Romulans from Vulcan, and their intent to return: 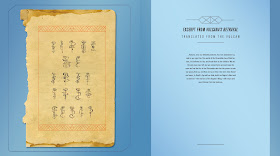 As one might expect from a product from a different publisher, it sounds as if Goodman won't be drawing upon existing non-canon sources to fill in some of the historical gaps, having crafted his own explanations for the Eugenics and Romulan Wars:


My CBS contact and I disagreed about Khan and the 1990's. I felt like referencing events that didn't happen in our 1990's would be a problem, but he insisted that I bring it in. I relented, and resolved the issue with a footnote that I think covers all the bases very subtly about why none of us who lived through the 1990's were never under the rule of the genetically engineered supermen.

At that first lunch with my CBS contact, when he mentioned his idea for the book, the first thing I thought of was, "I get to write the Romulan War!" Almost nothing in canon was written about this. I had only to figure out a war where the two sides never met face to face, that no one knew where Romulus was, and decide if the Cheron mentioned in The Battle of Cheron in TNG’s "The Defector" is the same Cheron from "Let That Be Your Last Battlefield." Otherwise, I had free reign. I've read a lot of military history, especially World War II, and it inspired how I laid out the war, and how it helped lead to the formation of the Federation. Also, I figured a link between Cheron from "Battlefield" and the Romulans that is canon, so I decided it was the same Cheron.

Here is the attack on Starbase 1, from the start of the Romulan War: 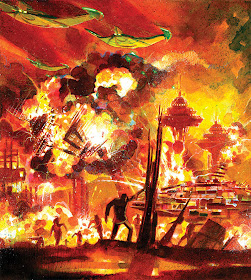 This document comes from the logs of the starship Intrepid, during the war: 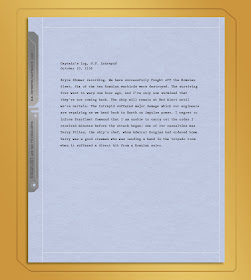 Enterprise was probably the most detailed look at its own period of history, so that chapter of the book didn't require much of my imagination, but that doesn't mean it was easy. The fact is Enterprise stopped short of saying how the Federation was formed, so I had to explain where Archer was speaking in that last episode. Also, the Temporal Cold War and the war with the Xindi were things that the writers had fun using, but we never fully figured out, so I had to do that in the book, and I was cursing the writing staff of Enterprise the whole time I was writing that section. 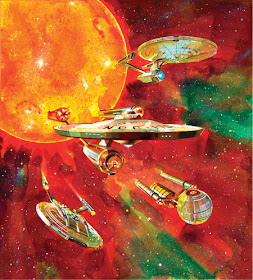 Of course the book also goes well into history after Enterprise, here is a young Lieutenant Commander Matthew Decker, on the USS Patton: 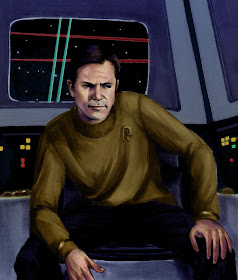 And here is a Romulan document describing the formation of the Klingon-Romulan Alliance: