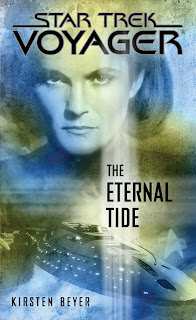 The latest book in Kirsten Beyer's Voyager relaunch, The Eternal Tide, is starting to appear in bookshops, and is released to ebook buyers tomorrow. Simon and Schuster have released an excerpt to tempt you. Here's the opening tease:


Captain Afsarah Eden couldn’t tear her eyes away from the viewscreen. Voyager moved at maximum warp, the deck below Eden’s boots thrumming with the engines’ strain as stars stretched themselves out in the illusory image that defined this particular version of warp flight.

Eden and her crew were fleeing certain death. And with each second that passed, oblivion was gaining on them. The ship could not maintain its current velocity indefinitely, nor could it safely form a slipstream tunnel to increase its odds of outrunning destruction.

Part of Eden knew that by running, they were only prolonging the inevitable. In some cold, lonely corner of her heart, she had already accepted her own death. But the duty that had bound her to Starfleet and sustained her through the most difficult times of her life demanded that she make this attempt on behalf of those she led.

The temptation, no, the desperate longing she felt to order the ship to come about was becoming more difficult to ignore. Did she need to see the beast, to name it before it devoured them? Was it some absurd definition of honor that called on her to stand her ground, even in the face of annihilation?

Or was it simply the fact that she was tired of running? This monster had already taken too much from her. There was no longer any true victory to be claimed here. She was not fleeing a predator that might grow weary of its chase. She was attempting to outrun something that had all but stripped away every last shred of her own identity. She was incapable of resisting or defying it. It would have her. And given enough time, it might actually bring her to accept that its version of Afsarah Eden was truer than the one she had constructed in fifty-plus years of life.

She belonged to this darkness, and as that certainty struck her with the force of a roaring wave, she began to lose her bearings. Her head grew inexplicably light and her knees buckled. Eden reached her right arm back to steady herself against the command chair in which she knew she would never again sit.

Her eyes briefly registered another person standing beside her, and the motion meant to reorient her became a graceless stagger as she unconsciously rebelled against the sight her mind refused to accept.

She had to be.

Eden willed the vision to clear, but the longer she stared open-mouthed at the figure next to her, the more that figure seemed to coalesce and solidify.

Beside her, Admiral Kathryn Janeway’s stone-cold eyes held Eden’s with a painful mixture of determined despair.

“This is a dream,” Eden said, willing her voice to hold steady even as her senses scrambled for an escape route.

“Feels more like a nightmare to me,” Kathryn replied.

You can read the rest of chapter one, here.