First seen at the Comic Con several weeks ago, DST has now officially announced details and released images of their first Star Trek Select figure, Mr Spock and the Horta. Part way between action figure and sculpture, the select range comes with diorama scenic elements and interchangeable parts, which allow you, in this instance, to present Spock interacting with the Horta, or as a free-standing figure: 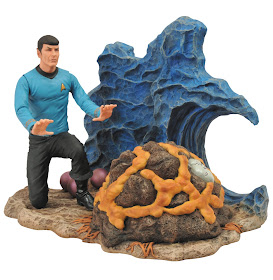 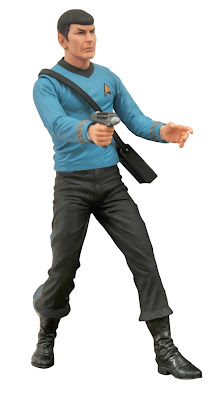 For years, Star Trek fans have repeatedly opened hailing frequencies, demanding the return of 7-inch Star Trek figures — well, Diamond Select has heard their transmissions! This winter, DST plans to release the first in a line of Star Trek Select figures, depicting iconic characters from across the Star Trek universe in the 7-inch scale fans have asked for. Each figure will come in DST’s famous Select packaging, and will include a diorama-style display base as well as interchangeable parts to recreate scenes using that diorama. And the first release in the line is the most iconic Star Trek character of all, Mr. Spock!

Depicting Mr. Spock as he appears in the classic episode “Devil in the Dark,” this figure includes a cave diorama with a Horta alien — the first Horta toy ever made! Spock himself will have interchangeable legs for standing or crouching poses, and interchangeable hands to hold a phaser or establish a mental link with the Horta. He even comes with an alternate screaming head! The figure will be available in early 2013, and will be followed by James T. Kirk, as well as numerous other important and fan-requested characters from the Star Trek diaspora. The Marvel Select line celebrates its 10th anniversary this year, so here’s to (at least) ten years of Trek Select!


DST have also released the concept art, which shows all the interchangeable elements. You can get a peak at the Kirk (and Khan) artwork in my previous coverage. 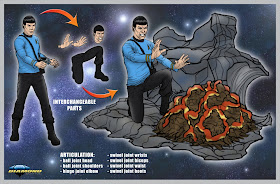 Elsewhere in the DST workshops preparations are being made for the latest re-issues of some of their Star Trek props, this time putting their phaser, communicator, and tricorder together into a TOS landing party three-pack, which is also expected early next year:

DST have also teased at the packaging for their forthcoming starship models, the Klingon Bird-of-Prey and USS Enterprise-B: 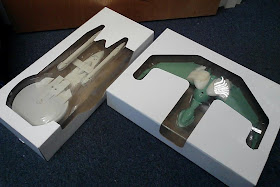 Away from DST, Round 2 have announced the results of their fan poll to determine the next ship they will make a model kit of, and that will be a 1:32 scale TOS Shuttlecraft Galileo.