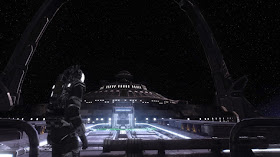 The Star Trek Online team have posted the latest in-universe extract ahead of the next feature episode release. Prelude to The 2800: Boldly They Rode:

No offense to the good people of Bajor, but I'm glad to be back on the Defiant. It's not DS9, but …

These past weeks have been rough on the crew. Half of my security team is still in sickbay and everyone else has been working double or triple shifts. People are on edge, petty disagreements are turning into fights … life on a Defiant has never been easy, but now more than ever I need to get these people back to DS9.

I'm putting the entire crew in for commendations, and I've nominated Karen Andrews for the Pike Medal of Valor.

A medal's not enough to reward her for all that she did for DS9. Karen was one of the finest officers with which I've had the honor to serve, and a good friend. Poker night at Vic's won't be the same without her.

Replacing Karen in Ops … I don't even want to think about that yet. Starfleet's already forwarded me a stack of personnel files, and DS9 will need a new first officer.

I'll read the files later. When this is over.

It won't be long now. The female changeling is insisting on handling the transfer of power herself, and at this point, I'm not in a position to disagree.

If we're lucky, this will be a simple handover. But, as Karen always used to say, care and diligence create luck.

I'll send over an officer I can trust and stand by with the fleet. If it all falls apart, then the Defiant will be ready to lead the fight to take back DS9.

By tomorrow the station will be ours again, or we will lose it forever.