I was looking at the Star Trek ongoing page on Mark Martinez's Star Trek Comic Checklist (one of the finest Star Trek resources in all of online Trekdom) and noticed a couple of covers new to me. Mark was kind enough to fill me in on the origins:

For issue five we have an intriguing "cover contest" edition from the Sharp Brothers, first found by one of Mark's readers on DisposableHeroes.co.uk. StarTrek.com has issued details about this just today:


IDW and the Comic Book Legal Defense Fund (CBLDF) have joined forces for a Star Trek "Be A Redshirt" contest. The grand prize: You -- as a Redshirt -- and your favorite comic-book retailer will be featured on an exclusive variant cover of an upcoming Star Trek comic, and you, in true Redshirt fashion, will fall victim to a phaser blast in the midst of heroically saving your retailer. 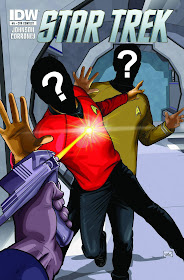 And to get 100 issues of this 300 edition version all you have to do is tell them why your comic book shop is the best. Pretty cool!:


Starting on Wednesday, fans can enter the contest by writing an explanation of 300 words or less about what makes their comic-book retailer the best in the business, and then emailing that explanation to contest@IDWPublishing.com with the subject: Save My Retailer. As noted, the winning fan and his or her retailer will be depicted on a limited-edition variant cover of Star Trek, IDW's recently launched series set in the Star Trek (2009) universe, with the new crew featured in alternate-timeline versions of classic TOS storylines.

The Redshirt cover will be limited to just 300 copies, with 100 each provided to the winner and his or her retailer, as well as 100 to the CBLDF in order to assist them in carrying on their important and challenging efforts to defend retailers everywhere. Finally, the winning fan will also receive the original cover art, which will be rendered by the Sharp Brothers.

Meanwhile back at issue three Joe Corroney updated his Facebook gallery with an amended version of his Starfleet recruitment cover, with the Andorian lamentably sacrificed in favour of an Orion: 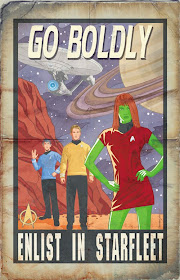