John Byrne and Chris Ryall have posted a couple of new bits on Byrne's Frontier Doctor series (which started this week). Ryall posted this page from issue three, teasing at the double sequel to both Assignment: Earth and Crew issues!: 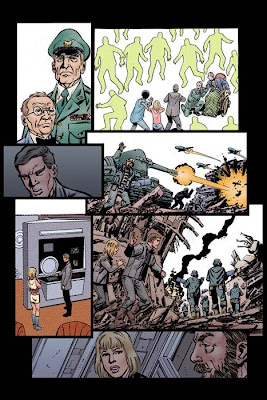 And on his forums Byrne commented on the third and forth issues of the series, which will also feature the USS Yorktown, seen previously in Romulans: Schism, now with a new bridge (after it was destroyed in that story) featuring a hybrid TOS/TMP design.