IDW have announced a few new projects at the recent San Diego Comic Convention. The Star Trek editorial job has been pass on for a second time with Andy Schmidt replacing Andrew Steven Harris as of a couple of weeks ago. According to reports by TrekMovie.com and Newsarama Schmidt has spoken of talks with Pocket Books and has a desire to create a singular continuity between IDW's comics and Pocket Books' prose works - which could see Titan and Sulu/Excelsior stories in the future (some way into 2009), Schimdt has also been quoted as wanting IDW to push forward Trek a bit more, to "go beyond just filling in the gaps and start to drive the bus".

Because Schmidt is so new to the job the plans for the next year are not entirely clear, so for now there are just a handful of confirmed series, though Schmidt plans to have even more comics out next year than what IDW have put out this one. What have been announced are:

Romulans: The Hollow Crown - John Byrne’s previously announced two-part sequel to his Romulan issue in the first Alien Spotlight series. According to Trekmovie the series will now be starting in October - a month later than previously announced, and what recent solicitation have indicated (see below). Also as previously suggested there is still the possibility of addition Romulan sequel stories later in 2009.

The Last Generation - What was first announced as a TNG mirror universe series by Andrew Steven Harris has evolved into a Myriad Universes style what-if? story. Illustrated by Gordon Purcell and starting in November, The Last Generation will, in five issues, tell the story of an alternate timeline where Kirk failed to prevent the assassination of the Federation president at the end of The Undiscovered Country and a galaxy where the Federation and Klingons went to war, with the Klingons eventually conquering Earth. The series will be set around the same time as early-TNG and will feature Worf, Sulu, and Picard leading a resistance on Klingon occupied Earth.

Alien Spotlight II has been pushed back from starting soon to early 2009. Keith R.A DeCandido is still down for the Klingon issue illustrated by J.K. Woodward and Scott and David Tipton have been announced as the writers of the Q issue. TrekMovie claim those are the only two confirmed for now, which would seem to question whether or not Andrew Steven Harris will still be writing the Ferengi issue, and/or which of the previously announced writers and featured Aliens will still make the cut (the last Alien Spotlight series juggled many of it's creators after the initial announcements)

As we know John Byrne is working on a plethora of projects and proposals for IDW, and at least one will see light early next year, the most likely candidates are either a second Assignment: Earth series or the (five or six part) prequel series which currently has a tentative title of "Crew". In an interview at Newsarama Byrne mentioned the second Assignment: Earth series would likely take place over the same span of time (late 60s to early 70s) as the first series. Meanwhile on his own forums he has revealed some details about Crew: "The story follows one particular character from cadet to lieutenant, and not all aboard the , or even cruisers." The story will apparently feature characters from the Pike era, and as shown in sketches on his forum will have an appearance by Captain April. Also on his forums John Byrne has revealed some of the starship designs he has been working on for the series, like these: 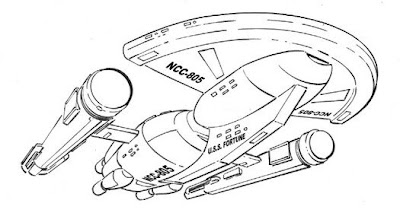 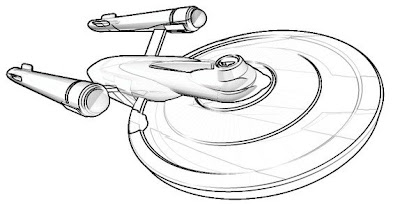 Check out this post, for more of John Byrne's development artwork. (I find them a pleasant hybrid of TOS and designs - though somehow doubt that was intentional)

John Byrne also mentioned on his forums recently that another series idea he has had (but currently sidelined for any further development while he works on other ideas) was something featuring the adventures of Balok and David Bailey (from "The Corbomite Maneuver").

Beyond the many works of Byrne, coming in early-to-mid 2009 might be some sort of tie-in comics project for the new movie, with potential involvement by director JJ Abrams and co-writer Robert Orci.
In the more near term IDW’s solicitations for October have recently been announced. They are back down to two issues (plus an omnibus book) this month, which are as follows (new cover art for The Hollow Crown #2):

Mirror Images #4:
The struggle for control of the I.S.S. Enterprise heats up! An already suspicious Captain Pike takes steps to snuff out Jim Kirk’s mutinous plans permanently, sending his first officer on a dangerous suicide mission! Can Kirk fight his way out of Pike’s plot, or has he been outwitted for the final time?

Romulans: The Hollow Crown #2:
The best laid plans go often astray… but with so many conflicting agendas, whose plans will see fruition, and whose will fail? Court intrigue, assassinations (attempted and successful), weddings, promotions, and Klingons at every turn! This concluding tale from the annals of Star Trek by John Byrne ends with a bang—literally! 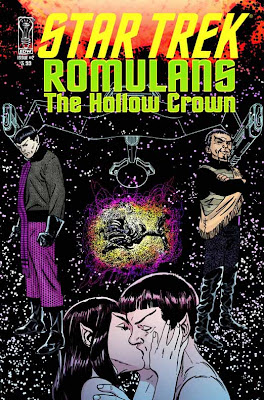 New Frontier: Turnaround omnibus:
Peter David celebrates the 10th anniversary of New Frontier with this all-new tale featuring characters from his hit novel series. The most dangerous experimental vessel in the galaxy—a prototype time ship—has vanished, and it appears that the man who stole it is none other than Starfleet Admiral Edward Jellico. 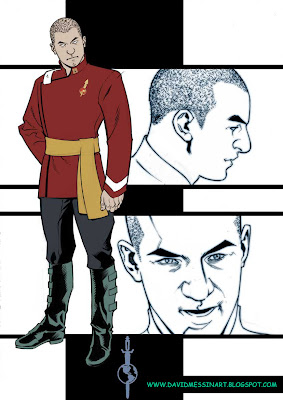 Check out ’s blog for more.