The expansive continuity that is the Star Trek "relaunch" novels range often leaves people wondering: "What do I need to read before Articles of the Federation?" or "...Destiny?" or "...The Fall?"; well here are the answers.

If you're a bit lost navigating the sometimes complex web of interconnectivity between the various Star Trek novels in the post-finale continuity, this is the resource you need. TrekBBS user Thrawn found a most elegant solution, with his brilliant Star Trek Lit-Verse Reading Order Flowchart. Now (as of 2020) on the version six, Thrawn and I guide you through the world of Star Trek fiction.

Whether you're a fan of TNG, DS9, Voyager, or Enterprise the chart below will show how they spin off into New Frontier, Titan, IKS Gorkon, Vanguard, or Seekers, and crossover into Destiny, Typhon Pact, The Fall, Mirror Universe, and more; letting you chart your own path through the Trek-litverse. Once you've got to grips with the flow chart you might also find some of my lists a useful reference too. Click the image to view larger: 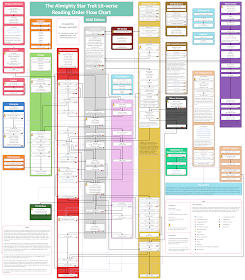 Many thanks to Thrawn for allowing me to share this fantastic resource with you, and for his continued support in making new revisions. For more information on how everything links up, check out the Charting the Novel-verse thread on the TrekBBS, or have a look at The Star Trek Lit-verse Reading Guide.

Not sure where to begin your reading adventure? The chart highlights several ideal starting points. Here is a full explanation of those suggestions: