A crowd funding campaign to make a Voyager Documentary has got off to a phenomenal start, just about tripling its initial goal to raise $150,000 to complete the film, in less than 24 hours. It's already flying through several layers of stretch goals to make the film longer and more elaborate.

The Voyager Documentary (snazzier title awaited) is being put together by 455 Films, who previously brought us the similar format DS9 documentary What We Left Behind(ad), as well as other Star Trek documentaries For The Love of Spock(ad), Chaos on the Bridge(ad), The Captains(ad), and Get a Life!(ad).

The previous DS9 documentary brought together cast and crew to reflect on the production and lasting legacy of the series, and the new Voyager documentary will presumably take a similar approach.

With the impressive start to funding, they've already raised enough to make a longer film, with some nice graphics, and additional footage, and are well on the way to adding in some original music. The DS9 film ultimately raised almost $650,000, which also allowed them to undertake HD remastering of select clips for the film; a real highlight, with DS9 and Voyager the only Star Trek series not currently available in HD - So I'm very much hoping that will be the next stretch goal for this campaign too. 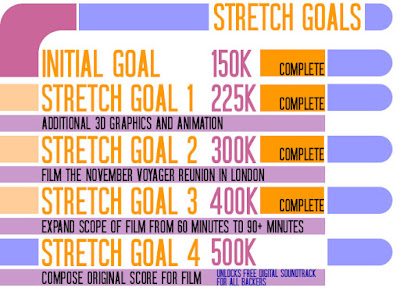 If you'd like to add to the efforts yourself, there are various degrees of support to chose from, including options to get physical media copies of the film, and all manner of apparel and other goodies you can pick up as part of it too. Check out the Indiegogo campaign for all the details.
And while we're waiting for the film, I also highly recommend the delightful Delta Fliers podcast, with Garrett Wang (Harry Kim) and Robert Duncan McNeill (Tom Paris), who are undertaking a weekly rewatch of Voyager episodes and reminiscing about their experiences on the show. They're just now reaching season three, and I've been listening along every week and really enjoying rewatching Voyager with their added insights. Good stuff.