Michael Chabon introduces the secret civilization of the Romulans

Star Trek Picard creator, writer, and executive producer, Michael Chabon has been over the last few months occasionally sharing fascinating background articles on various aspects of the people and places featured in Picard. His latest piece introduces us to Romulan society, giving us a fascinating insight into the Romulan worldbuilding that informed what we saw on screen, and hopefully will continue to expand the species' lore as the series continues. Continue below for a look at some of the highlights from this latest post, and his previous articles. 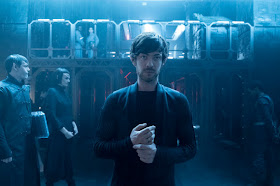 This Romulan backstory adds ever more layers of deception and subterfuge to the Romulan culture. My favourite element looks for where the roots of this might lie, in the nature of Romulus itself:

Legend holds that the basis of Romulans’ ﬁxation on deception and the hiding of secrets is the unusually high proportion of mimetic (camouﬂage-using) native animals and plants that the ﬁrst settlers of Romulus found on arrival, snakes that look like ﬂowering vines, ﬂowers like lizards, mammals that alter their coloration according to patterns in light falling on them. Best known of these to outsiders, of course, is the so-called “warbird” after which Romulans have long patterned their military starships. The plumage of this raptor has unique optical properties that mimic the wavelength of ambient light, causing the birds to “disappear” against a clear blue sky, a phenomenon that is said to have inspired the most celebrated, and most Romulan, of all Romulan technologies: the cloaking device.

Of course, that could just be a classic Romulan “cover story.” Romulans are addicted to cover stories.

Another section looks at how the Romulan mentality informs architecture and urban design. I love the attention to detail here that has traditional Romulan design influence more functional modern motifs in their society:

Traditional Romulan compounds — Romulans live in kinship units — are built at the center of a kind of hedge maze whose outer perimeter is often contrived to look like a “natural” grove of trees, as if, within, there were no houses at all. Once you reach the house itself, you ﬁnd a false “front entrance”; all Romulan houses are entered from the back. Even in big cities, modern housing megastructures have false front entrances, and are surrounded by some kind of token or symbolic maze, often a pattern in the paving stones.

I imagine this document was also given to Una McCormack, as the the Picard tie-in novel The Last Best Hope(ad) describes some of these features in action at Romulan locations featured in the book.

Chabon also expands on the idea of Romulans having multiple names, to give out to people with different levels of trust, taking it even further than what was revealed in The Impossible Box:

At birth, every Romulan is given four names: a name known only within the family; a “common” name employed in the Children’s Houses, for religious rituals, and for certain other traditional institutions; an “imperial name” with which the individual is identiﬁed by the state; and an “open name”, the name that the Romulan gives to outsiders. Romulans change their open names at will, often making use of three, four or ﬁve at a time, in different social contexts. Then there is the “true name,” used only at moments of deep intimacy.

The article also discusses the structure of the Romulan government, the complexities of Romulan weddings and families, religion, and the position of the Qowat Milat in Romulan society. A fascinating read that singularly expands Romulan culture as we know it significantly. 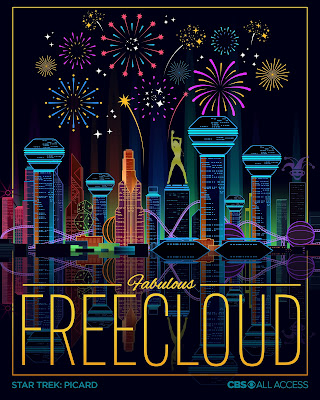 One of Chabon's previous pieces gave some background on Freecloud and Stardust City, the location featured in Stardust City Rag.

He introduces the planet as being in a key point in space between the Federation, Klingons, and Romulans.

Freecloud is a planet in the Alpha Doradus system, Iconia sector, Beta Quadrant. Initially settled in 2180 by a schismatic group of Earth-descended Anarcho-Existentialists from the planet Silentum. Until the Federation drawdown of 2385, Freecloud was one of a handful of Federation-affiliated star systems in the so-called Thread, a narrow “isthmus” connecting two larger areas of Federation-controlled space, surrounded on all sides by the Klingon and Romulan empires. Freecloud’s proximity to three major star-civilizations and several important outer-Beta Quadrant trade routes, and its location just beyond the negotiated terminus of the Neutral Zone, along with the hyper-libertarian ethos of the founding Freeclouders — Freecs, as they’ve always called themselves — and along with their legendarily secret cryptobanks, have long made this “wide open” planet a haven not just for merchants, oligarchs and traders but for fugitives, outlaws, exiles and spies of every stripe and species. Refuge of lost causes, incubator of insurrections, last resting place of deposed monarchs and tyrants, hotbed of espionage and marketplace of secrets, Freecloud — and in particular its chief conurbation, Stardust city, on the shore of the Perfume Sea — has played a part in almost all the mischief cooked up at this end of the Beta Quadrant for the past two centuries.

Chabon describes how the planet is technically within the Federation, but operates with a great deal of autonomy. This in turn informs the culture of the people of Freecloud, which Chabon also outlines, along with the geography of the planet. 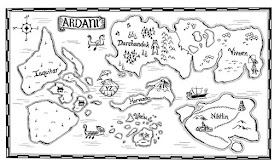 The first of these articles Chabon shared looked at Ardani, the imaginary world of Thaddeus Worf Riker-Troi (whose full name is revealed in the piece).
It seems Thad is a 24th century Tolkien, having invented the numerous languages and peoples of the planet Ardani, as mentioned in the episode Napenthe. Chabon outlines both Thad's creation of this world, and the cultures he invented; a fascinating fantasy world. Chabon also notes how Kestra inspired Thad:

The final “land” that Thad added to the topography and history of Ardani was the Woods of Viveen, a remote expanse of lakes and dense forest at the far northeastern tip of Darshandok. Created to acknowledge, to celebrate and to make room, in his private realm, for his beloved baby sister, Kestra, the Woods of Viveen are home to those staunchly matriarchal amazons, the Viveen, who speak their rough-and-tumble language, Viveena — in which the same word, kestra, means both “girl” and “fierce.”

This document has also directly influenced tie-in fiction, with Thad's character and invention featured in James Swallow's The Dark Veil(ad).

Each of these pieces go into great detail about their respective subjects, and give a fascinating insight into both the world of Picard, and the behind the scenes process of the series; with this material used to inform the creation of these worlds on screen. So I highly recommend you have a read through each of them in full: Romulans, Freecloud, Ardani.

I hope very much there is more to come, I'd love to get similar insights into the XBs, the Artifact, the Zhat Vash, the Synths, etc. And Simon and Schuster, won't you get this multi-award winning author a book deal to bring us The Worlds of Picard or something?

Picard season one is available now on bluray, or streaming via Paramount+(ad) in the US, Bell Media services in Canada, and on Amazon Prime Video(ad) almost everywhere else in the world. The world of the series has been further expanded in two tie-in novels so far, The Last Best Hope(ad), and The Dark Veil(ad), plus a comic series, Picard: Countdown(ad). A third novel, Rogue Elements(ad), is due later this year.

For more on Picard, have a look back through my Picard tag, for coverage of the episodes, behind the scenes, and tie-in fiction, and other products.