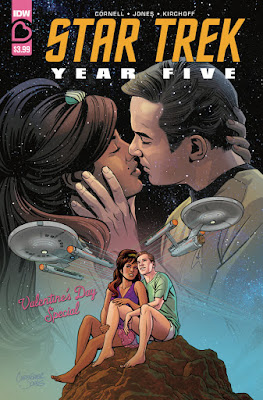 Out this week, just in time for Valentine's Day, was IDW's latest Star Trek comic special, this time tied into the current TOS Year Five series. Captains of Sea and War, so named for a quote of a quote in the story, does start in the time period of that series, but then continues into the TOS movie era, with sections in both The Motion Picture era, and around about the time of The Final Frontier, managing to tell a decades spanning romance in the progress. For one regular length (20 story pages) comic, it packs in an impressive amount of story, character, and emotional resonance. Continue belew for my thoughts on the book.

The book is written by Paul Cornell, his first Star Trek fiction as far as I can tell (he's done some articles and an unofficial episode guide before), but he has long list of credits on-screen, in books, and comics, including a lot of Doctor Who in all formats. Art comes from Christopher Jones, also new to Trek I think, but a busy comics artist, working on lots of DC books, and plenty of Doctor Who too. The pairing has delivered nicely here with an ambitiously wide ranging story calling on the art to delivery lots of distinct time periods and places.

The book introduces us to Captain Laura Rhone of the Miranda class USS Drake, who initially encounters Captain Kirk while both are on shore-leave together, along with much of their crew. The first page gives us an amusing start where Doctor McCoy acts as matchmaker by simply removing himself from the conversation Kirk thinks he's in. Moments later there's a kidnapping and before you know it the two captains are sharing numerous adventures, and quiet moments alone after.

Rhone is an instantly likable character, comfortably taking the lead with Kirk, and putting him in place when needed. There's a remarkably strong chemistry formed between the pair, cutely set up over the first few pages with scenes with the pair in bed acting as a visual full stop to every alternate page in the sequence of encounters.

Kirk's changing roles and priorities in the TOS movies then drive the shape of what follows, with Rhone having to live with the consequences of his life choices, and later her own.

I wasn't expecting a story that took a thread through Kirk's life (even dipping into his past relationships as a way of driving the events of this story), so found this book a very pleasant surprise. The era-spanning story made for a visually varied book, not just in the changing settings and styles, but the aging characters too. There's a depth to Rhone that you don't often get from guest characters in comics, I think partly because of how she handles the relationship with Kirk, but also because, like Kirk, she is more than herself, she is also her ship, and her crew, which loyally stick with her throughout this story.

As a one-shot this is a really great book, it's fun and at times funny, it's poignant, it leans on Star Trek history for story and visuals very satisfying. Being under the Year Five banner, it makes me hopeful that having set this character up, she might have another adventure of in the early days of the relationship ahead in the continuing Year Five story. I would certainly welcome the return of her, and the opportunity to expand on the likable crew sketched out in this story. If that's not to be, well, this was a great little story right as it is. I highly recommend.


I assume this will be included in a future Year Five omnibus, but that hasn't been confirmed yet. For the time being you can find it at (among other places)  Amazon, Things From Another World, Forbidden Planet, Barnes and Noble, and iTunes.

And if you're not quite convinced, you can also check out my previous five page preview and cover gallery post.


You can find reading lists for several Star Trek comic series on my Trek Collective Lists site. To keep track of all the latest Star Trek comic releases, hit the comics button on my 2020 schedule page.