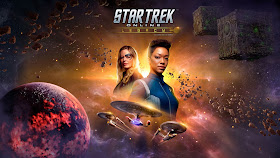 Star Trek Online have announced a new tenth anniversary celebratory expansion, Legacy, which among other things will bring Jeri Ryan back to the game to reprise her role as Seven of Nine, in her new Picard style, and for the first time feature Sonequa Martin-Green as Michael Burnham.

The two distant characters would appear to be brought together by a new two-part "episode" in the game, The Measure of Morality, which sees captains visit Excalbia, where the Excalbians have begun a test of good and evil, akin to their original TV appearance in TOS's The Savage Curtain. Completing this mission will be another way you can win one of the recently announced Khitomer class starships in the game.

If the trailer is anything to go by, this game will be a nostalgic visit to STO's Star Trek universe spanning previous adventures:

Here are a few images from the expansion: 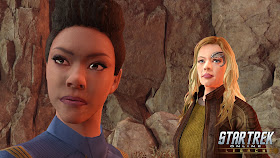 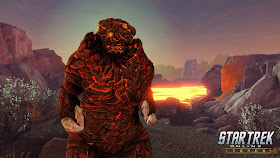 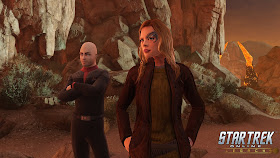 Another part of the expansion is a new Task Force Operation, To Hell With Honor. Described thusly: "Bring your starships to J’Ula’s shipyards on a distant moon, and battle one of the largest enemies we’ve ever created in the game." Presumably that's what we're seeing here: 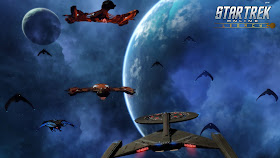 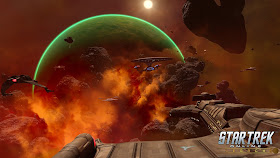 Also just launched is the Borg Lock Box, a chance to get hold of all sorts of Borgy bits in the game. The headline prize, the Liberated Borg Command Juggernaut. Here's a nice little backstory from STO explaining the unusual Borg design:


Designed by the recovering minds of newly liberated Borg, its disjointed appearance reflects its designers’ rebellion against conformity, while the solid internals reflect a return towards structure to keep one sane. The result of this internal conflict is a starship that is a terror in external conflicts, possessing many of the Borg’s most fearsome strengths in combat, such as the capability to launch Plasma Disintegrating Blasts.

The juggernaut come with some extra abilities, including boosted hull regeneration from Enhanced Nanite Regeneration, and a plasma damage boost from the Disruptive Topological Matrix.

You can see full specs for the ship on an STO blog. Here's a video from ZE Films showing off the ship:

Further abilities can be won from the Lock Box, including a Retrofitted Assimilator, which assimilates ships via a nanoprobe-laced torpedo, and Cutting Tractor Beam which causes damage and disables systems of enemy ships.

There's also a  Assimilated Plasma Weapon Pack, which gives new characteristics to ship and ground based weapons, and sometimes this prize will also include Borg Vanity Shield, which will let you apply the aesthetics of the Liberated Borg Command Juggernaut to another ship.

And there's the grandly named Biological and Technological Distinctiveness Extractor, a Borg armature weapon that also increases your healing powers while dealing damage to your opponents.

There are further Borgish character traits and abilities to win too, see the STO blog for full details of all the prizes.