Heritage Auctions are about to have an auction of movie posters, and among the numerous lots there are several original pieces of matte painting art, mostly from Star Trek productions!

These give us a great look at several alien worlds, showing wider fields of view than what ended up on screen, and getting to see the artwork in fantastic detail. Continue below to check them out: 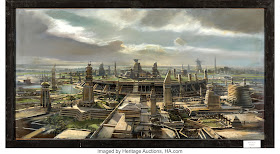 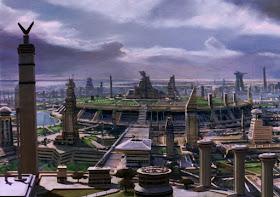 First up one of my favourite alien cities, Romulus, the painting of which Heritage attribute to Syd Dutton Illusion Arts. This matte painting first appeared in TNG's Unification, and was reused for DS9's Inter Arma Enim Silent Leges. The onscreen usage included a separate foreground element used with a camera move to give a greater sense of depth and perspective. The image was also tinted and used with different clouds to suggest different times of day. And of course this painting was the inspiration for a much more elaborate shot in Nemesis that really showed off the city. 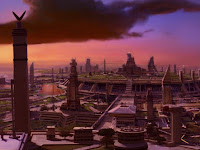 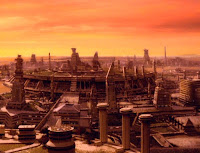 Next we have an equally iconic locale, the First City of the Klingon Empire, on Qo'noS, agained credited to Dutton. This wide matte painting first appeared in TNG's Sins of the Father, and later in Redemption, and DS9's House of Quark. Like Romulus, some shots include an additional foreground element, and the white patches of the great hall allowed animation of figures moving between the columns, further animations and composition were used to add lighting to the sky, and when the scenes called for it, flames in the burning city! 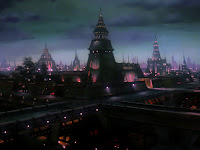 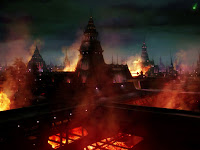 The option of a panning shot isn't always used, with close-ups of different parts of the painting giving an impression of multiple locations. The Great Hall is often singled out, and appears to be two different paintings, as the day time version has quite a lot of different details to the night. 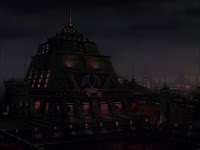 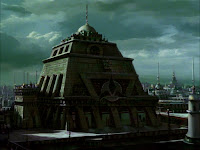 Voyager brought us an underground Ocampan city in Caretaker, which is from Dutton as well. Like the above images, a foreground element was used to add in the platform, in another panning shot. You can see comparing the painting to the onscreen appearance a lot of detail was washed out in the brighter onscreen presentation - Wouldn't it be great is a HD remastering project fixed that?

Ferenginar first appeared in DS9's Family Business, and later Ferengi Love Songs, typically with a rainy overlay! As you can see, the matte painting, by Dutton again, was framed a good deal wider than we saw on screen. 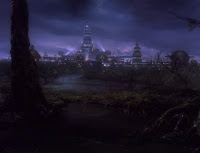 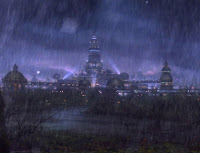 This next one is interesting, it's very recognisable as Cardassia Prime, but it's not a view of the planet that seems familiar to me. Was it used? It's certainly not the much more familiar shot that appeared in numerous DS9 episodes. 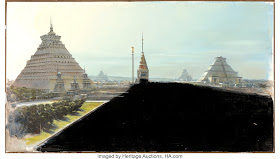 Getting a bit more obscure, we have Ventax II, from TNG's Devil's Due. Another Dutton piece, this one has a significant matte which allowed foreground footage of the Ventaxians running around (or deserting the streets) in response to the events of the episode. The original wider painting allows us to see the entire pyramid on the left. 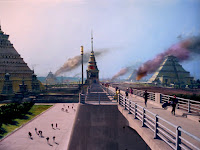 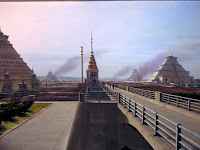 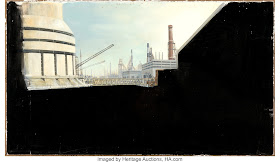 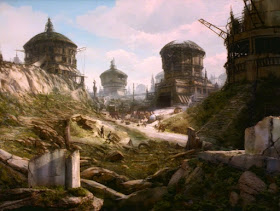 Finally we have an even more heavily matted piece, which Heritage Auction claim is Teplan, from DS9's The Quickening. I'm not sure about that attribution however, as it's clearly quite different to the matte painting that is used many times throughout the episode. I don't recognise it from any other episode either, do you? Maybe this is another alternate, like Cardassia above.

All these pieces will be going to auction in the coming days, along with loads of posters, none from Star Trek, but there are loads of Star Wars, including some really interesting international designs which are worth checking out.

Hat tip to TrekCore for their ever useful screencap galleries that illustrated the on-screen usages here (after some panorama stitching of the panning shots).