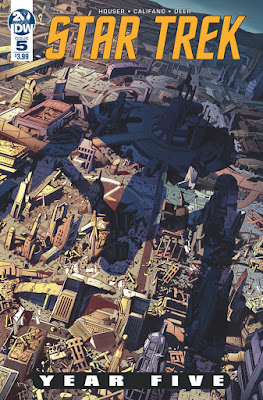 Out this week is fifth issue of IDW's Star Trek Year Five comic series, which is also the start of a new two-parter in the series, The Truth Artifact. This book comes from writer Jody Houser, with art by Silvia Califano.

This issue is available in two covers, from the series' usual artists: The main cover, featuring the shadow of the Enterprise, comes from Stephen Thompson (coloured by David Garcia Cruz). While a retail incentive is another retro design from J.J. Lendl. Continue below to check out those, and a five page preview: 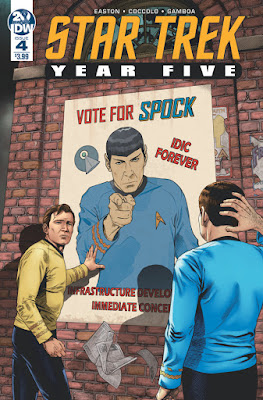 Out this week is issue four in IDW's Star Trek Year Five comic series, which is part two of the return to Sigma Iota II (of A Piece of the Action) story, Communications Breakdown. This story arc comes from writer Brandon Easton, with art by Martin Coccolo.

The book is offered in two covers, from the now familiar cover artists for the series: The main cover, featuring a striking "Your Country Needs You"-esque Spock poster, is by Stephen Thompson (coloured by Charlie Kirchoff). The retail incentive is a retro travel poster design by J.J. Lendl. Continue below to check out a five page preview.

Mego preview Wrath of Khan figures, and other updates

Mego have started to release further images of their forthcoming wave of Wrath of Khan action figures, continue below to check them out, and for some other Mego updates.

The first non TOS-TV era Star Trek figures to join the Mego revival range, on offer in this wave will be Admiral Kirk, Captain Spock, and of course Khan Noonien Singh. Mego's solicitations for the wave have revealed the packaging design for each, while the Mego Museum have released a large selection of images of the Spock figure: 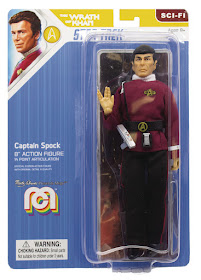 Got a few book updates today, including a better look at the most recently revealed covers. But first, some new blurbs:

Due out in March is Christopher L. Bennett's The Higher Frontier, the new blurb for which has popped up on Amazon's new listings, and reveals this TOS novel is move era (a bit of a rarity for TOS stuff) and will feature the Medusans. UPDATE: Bennett has now confirmed this is a The Motion Picture era follow up to his previous books in that period, most notably Ex Machina.

Investigating the massacre of a telepathic minority, Captain James T. Kirk and the crew of the U.S.S. Enterprise confront a terrifying new threat: faceless, armored hunters whose extradimensional technology makes them seemingly unstoppable. Kirk must team with the powerful telepath Miranda Jones and the enigmatic Medusans to take on these merciless killers in an epic battle that will reveal the true faces of both enemy and ally!


A thrilling novel leading into the new CBS series, Una McCormack’s The Last Best Hope introduces you to brand new characters featured in the life of beloved Star Trek captain Jean-Luc Picard—widely considered to be one of the most popular and recognizable characters in all of science fiction.

Explaining the higher price point of this book, Simon and Schuster now have it listed as a hardcover release; if so I think that would be the first Star Trek novel in hardcover since the Kelvin timeline Starfleet Academy series at the start of the decade!

Simon and Schuster have also now released the digital versions of the cover art recently revealed at the Star Trek Las Vegas convention, giving us a clearer look. Here's David Mack's TNG book, Collateral Damage, front and back covers. This is coming in October: 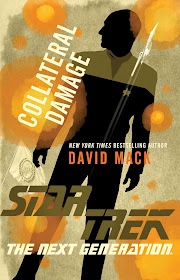 Cherry Tree, makers of Borg Cube PCs, have announced a new smaller model in their range. The ITX PC is a little bigger than their smallest (the Micro), but still pretty compact, at eight inches cubed. The slightly bigger design than the Micro allows it room for a graphics card. The ITX is available either as a fully fitted out PC (to whatever spec you provide from a myriad of options), or just a case ready to build your own. Continue below for a closer look, and more details. 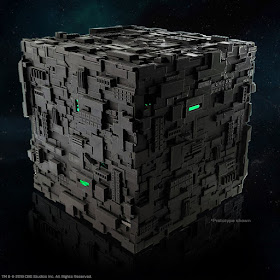 Jewellery makers Bixler have launched a large new range of Star Trek: Discovery themed jewellery, including necklaces, rings, earrings, cuffs, and cuff-links. The designs draw inspiration from iconography and props from the series, including Starfleet, Federation, Klingon, and mirror universe themed pieces. Every item in the initial range is offered in both solid silver of gold, many with diamonds too! Continue below to check out all the designs:

Some of the most unique designs in the collection are Klingon inspired, which have taken inspiration from some of the lesser seen Klingon emblems of the Klingon Houses. For instance this House of Kor emblem cuff:

At the Star Trek Las Vegas convention Hallmark have just revealed their 2020 Star Trek Keepsake Christmas decorations (which StarTrek.com have diligently released images of too).

This year they've got a whole new assortment of ornament styles to shake things up a bit. All of the ornaments in this year's range are interactive, part of a new series called Storytellers. Each ornament has built in sound recordings, as many have before, but these ones also work together to tell stories, depending on which ornaments you bring together using a Keepsakes Power Cord. Reporting from the STLV panel, TrekCore say this is the start of a three year program of releases, so there'll be lots more story to come over the next few Christmases.

The bulk of the range is made of character figurines, and they've gone mirror universe themed for this initial assortment, with mirror versions of Kirk, Uhura, and Sulu. Each is displayed on a small base, which lights up when they "talk". 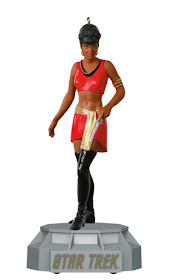 CBS have announced details for the home video release of Discovery Season Two. The season will be coming to bluray and DVD in November, including the fourteen episodes of Discovery, plus two episodes of Short Treks, The Brightest Star and Runaway -  Those two of course tie-in strongly to events in the season, but for some reason they seem to have decided to not bother with the other two Short Trek in the first batch, Calypso and The Escape Artist; hopefully they will show up in other home media releases later...

In addition to the episodes, there will also be two hours of extra features, including featurettes, audio commentaries on four episodes (Brother, New Eden, Through the Valley of Shadows, and Such Sweet Sorrow, Part 2), cast interviews, deleted scenes, and a gag reel. 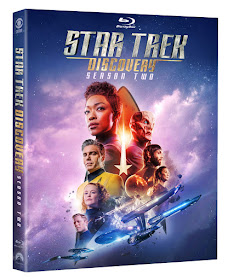 At the Star Trek books panel at the Star Trek Las Vegas convention yesterday the authors and editors revealed details of several new books coming in 2020 - Thankfully TrekCore were there live tweeting the news. Here's the novel line-up so far (from the present):

There's a lot to take in there! The cancelled Kelvin timeline novels are back at last, new Picard tie-ins (a comic was announced too), and there were also hints at efforts to keep the novel continuity as we know it in play somehow. It also looks like we're almost back to one novel a month. hurrah! Continue below for a closer look at everything.

STO: Awakening brings the game back to the 25th century, with Paul Stamets and a starship from a comic! 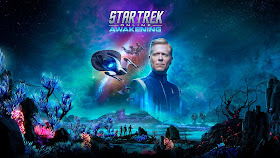 Star Trek Online's narrative is heading back to the 25th century in it's latest update, Awakening, which launches in September.

But they've still keeping plenty of Discovery seasoning, with a holographic version of Paul Stamets around to help with mycelial issues, and pesky Disco-Klingons led by J'Ula having travelling into their future. Here's how they describe what's coming in Awakening:


During Age of Discovery, players witnessed J’Ula and her Klingon forces steal Mycelial technology, which pulled them forward to the year 2410. Captains must now follow this ruthless Klingon matriarch back to the 25th century to ensure she doesn’t corrupt the entire Mycelial Network in pursuit of her own dangerous agenda. Unfortunately, the insurmountable threat J’Ula poses to the universe also draws out the Elachi, who fear her actions will lead to the destruction of their home planet - and they will stop at nothing to protect it. In order to complete their mission, Captains must rely on the help of an astromycologist expert, a sentient hologram of the legendary Lieutenant Commander Paul Stamets from the U.S.S. Discovery to help them track down J’Ula and repair the tears she’s caused in the fabric of space.

Awakening will also shine a new light on Patrols, with a system that makes them easier to find and easier to play – and offers new rewards. We’re celebrating this by launching five brand new Patrols with Awakening, that see you jetting around the galaxy with Stamets and STO favorites like Captain Kuumaarke, stopping Ju’la’s plans. In addition, there will be a Mycelial Event coming which allows you to earn a new T6 Elachi ship by completing the new episode, patrols and TFO.

Here's a teaser trailer, which is very much about teasing the Stamets-ness of things to come: