In the twistiest of twisty twists, CBS have revealed the new Jean-Luc Picard series will be titled, Star Trek: Picard - Which feels, just right.

The news was announced at the CBS upfront presentation for advertisers in New York City, along with a title card, and a short clip. Continue below for more details.

Here's an animated version of the title. I find it curious they are using the TOS font (rather than drawing on the TNG TV or movie styles) for the Star Trek part; I wonder if that will continue across all the new series to give some sort of brand consistency.


#StarTrek: Picard will stream exclusively on @CBSAllAccess in the United States, on Amazon #PrimeVideo in more than 200 countries and territories and in Canada on Bell Media’s @SpaceChannel and OTT service @CraveCanada. @StarTrekCBS @primevideouk #StarTrekPicard http://bit.ly/STPicardTitle
A post shared by Star Trek (@startrek) on May 15, 2019 at 2:30pm PDT

A short clip was also shown at this event, which hasn't made it online yet, but Buzzfeed's Kate Aurthur did grab a shot from it. You can see Picard apparently out of uniform, but an apparent return to brighter colours in the 24th century, with quite familiar looking uniforms on background characters: 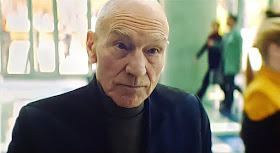 Speaking to the LA Times recently, executive producer Alex Kurtzman shed some new light on the series, describing it thusly:


The mandate was to make it a more psychological show, a character study about this man in his emeritus years. There are so few shows that allow a significantly older protagonist to be the driver.

What happens when circumstances have conspired to not give him the happiest of endings? Hopefully, it’s a reinforcement of [‘Trek’ creator Gene] Roddenberry’s vision of optimism. He’s going to have to go through deep valleys to get back to the light.

It’ll be very different than ‘Discovery.’ It’ll be slower, more meditative. It speaks to the rainbow of colors we’re playing with in all these different shows.

CBS have also announced all the distribution rights for the series now. Picard will, like Discovery, be available on CBS All Access in the US, and Bell Media channels in Canada. Viewers in the rest of the world will be served by Amazon Prime Video, which rather non-specifically covers over 200 countries and territories (so maybe the odd place is missing out, as is the case with Netflix).

I find this a rather irksome move, given it means international trekkies will now have to subscribe to two different services to watch their Trek, presumably just because Amazon was willing to pay CBS a bit more than Netflix to bag this series!

Anywho, here's the the (former?) captain announcing that news:


Incoming Transmission from @SirPatStew! The untitled “#StarTrek” Jean-Luc Picard series will stream exclusively on Amazon Prime Video in more than 200 countries+ outside the US & Canada and on CBS All Access in the United States. #primevideo @primevideouk http://bit.ly/APV-Picard [link in bio]
A post shared by Star Trek (@startrek) on May 13, 2019 at 6:00am PDT


Speaking of international distribution, Discovery has finally found it's way to China (one of the few countries not served by Netflix), available on Youku and Iqiyi. Star Trek China on Twitter shared the news, as well as some photos of some cool subway cars decked out to the max with Discovery art: 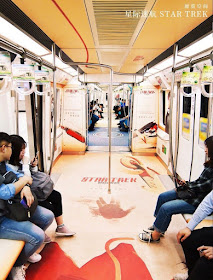