IDW have announced their solicitations for August, which include two new Star Trek comics; continue below for all the details of those, and other Star Trek comics updates.

Aftermath #1
Written by Kirsten Beyer and Mike Johnson, with art by Tony Shasteen.


You saw the stunning conclusion of the second season of Star Trek: Discovery—now witness the Aftermath! After discovering Michael Burnham’s personal log, Spock begins to unravel the story of Burnham’s journey from orphan to Starfleet officer—and the secret history of the Red Angel as well. But as he confronts the secrets of Burnham’s past, he’ll also have to grapple with his own. An amazing new Star Trek: Discovery miniseries begins here!

An exciting sounding return to Discovery from IDW here, with the first of a three part series. This book is offered in three covers, with the A cover (pictured) from Angel Hernandez. There will also be two retail incentive covers, one by George Caltsoudas, and the other a photo cover. 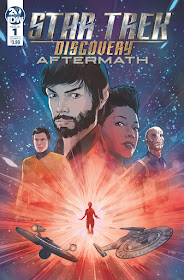 
During an investigation of a long-dead world, the crew of the Enterprise uncovers a mysterious device that at first appears to be a universal translator. But as Uhura investigates this strange new device, she’ll quickly discover there’s more than meets the eye about the Truth Artifact!

This appears to be the start of the third story arc so far in this TOS series. The book will be available in two covers, with the striking starship shadow A cover from Stephen Thompson, and a not-yet-seen retail incentive design from J.J. Lendl. 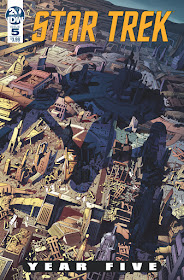 There are a few other updates from Year Five. Writer Jackson Lanzing recently teased these two panels from the forthcoming second issue of the series: 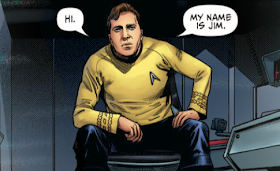 While artist Stephen Thompson shared some of his artwork from the first issue: 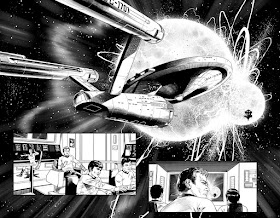 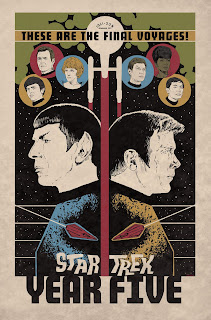 The first omnibus for the series, titled Odyssey's End, is also now listed on Amazon, with an expected January release; At the moment it's using J.J. Lendl's issue one cover art.


Join the crew of the Enterprise in all-new adventures as they near the end of their five-year mission, featuring the characters from the Original Series!

The crew of the U.S.S. Enterprise left Earth four years ago. They've traveled to strange new worlds, defeated impossible foes, and made universe-changing decisions. But now, with the end in sight, they'll have to face their biggest challenge yet. Step aboard the Enterprise with Kirk, Spock, Bones, Uhura, Sulu, Scotty, and Chekov as they begin the end of their original Five Year Mission and boldly go into an uncertain future in this new continuing Star Trek series!

Finally, in other omnibus news, the latest round of solicitons included an advance solicitation for the October release of: 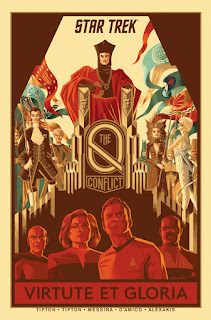 The Q Conflict omnibus
Written by Scott and David Tipton, with art by David Messina.


The captains of the Original Series, The Next Generation, Voyager, and Deep Space Nine meet for the first time in a contest of unwilling champions!

When a dispute between godlike beings threatens the galaxy, it will take all of Starfleet's best captains to stop them. Join James T. Kirk, Jean-Luc Picard, Kathryn Janeway, and Benjamin Sisko as they go head-to-head in a competition that will determine the fate of the Earth and beyond. Will they be able to emerge victorious, or will they be torn apart by The Q Conflict?

The omnibus seems set to use what was originally George Caltsoudas' cover for the first issue of the series.