Gold Key Comics are getting miniature reissues, in the form of a new series of Star Trek postage stamps! Eighteen covers from the first ever Star Trek comics will feature on stamps due out this month.

This latest release from the Inter-Governmental Philatelic Corporation adds a new twist to their usual formats. The company, which designs and distributes collectable stamps for many countries around world, typically releases themed series of multiple stamps, but previously with each theme given to a particular country. This latest series has been split in three, with near simultaneous releases in three globe-spanning countries: The Gambia, Grenada, and the Marshall Islands, with releases due on the 17th, 29th, and 30th respectively. Each country has six stamps from the series, which are being released as miniature sheets. Check them out: 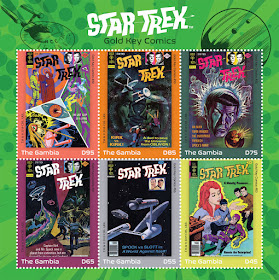 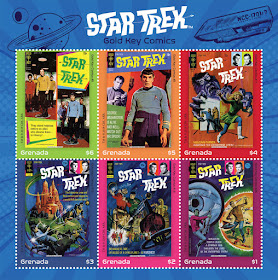 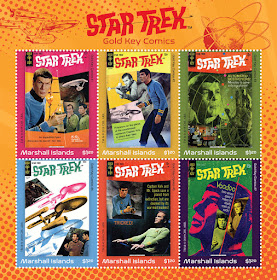 The whole series will be available directly from the Inter-Governmental Philatelic Corporation upon release, and typically from other retailers there after.

This isn't quite the first set of Star Trek comics postage stamps, Palau got there first with a series of comics inspired interior art style TOS stamps released in 2016. And those are just some of surprisingly large range of Star Trek stamps released over the years; check out my Trek Collective List for a look back at the numerous other designs previously offered.