The latest Star Trek novel is out now, continue below for text and audio excerpts, and other Star Trek books updates.

This month's new release is Dayton Ward's new TNG novel, Available Light. The story sees the Enterprise continuing it's exploration of the Odyssean Pass, as featured in ward's previous few TNG books, most recently Hearts and Minds. The crew visit a mysterious giant and seemingly abandoned ship found adrift in deep space, while the story also follows up on the fallout of the Section 31 exposure in Section 31: Control.

StarTrek.com have been good enough to release the cover art, by Doug Drexler, without the titles, so you can get a nice clear view of that alien ship: 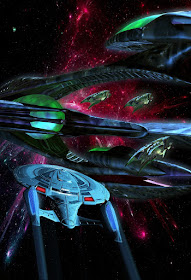 And here's a reminder of the blurb:


The past comes back to haunt Captain Jean-Luc Picard in this brand new thriller set in the universe of Star Trek: The Next Generation.

Section 31, the covert organization which has operated without accountability in the shadows for more than two centuries, has been exposed. Throughout the Federation, the rogue group’s agents and leaders are being taken into custody as the sheer scope of its misdeeds comes to light. Now Starfleet Command must decide the consequences for numerous officers caught up in the scandal—including Admirals William Ross, Edward Jellico, Alynna Nechayev, and Captain Jean-Luc Picard who, along with many others, are implicated in the forced removal of a Federation president.

Amazon have as ever made a Kindle preview available, Chapter's one and two:

As with most Star Trek books these days, there is also an audio edition, read by Robert Petkoff, and Simon and Schuster have released an excerpt from that too:

The audio edition cover is a variation on the main one, square format ready for download or CD releases: 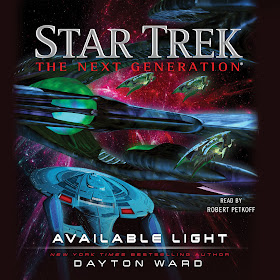 Meanwhile in other books news, another mystery listing has appeared online recently. Currently known only as Untitled STV, the book is expected to arrive in January 2020 - The URL for Simon and Schuster's listing of it gives us a good clue, indicating the V stands for it being a Voyager novel. So maybe Kirsten Beyer's To Lose the Earth?

Finally, looking back in time, TrekFM's Literary Treks podcast recently did an episode on Articles of the Federation, one of the best and most unique novels in all of Trek. They had author Keith R.A. DeCandido on to chat about it, making it one of those excellent author commentary episodes they do now and then. Well worth a listen.