IDW have released their latest solicitations, which include two new Star Trek comics due for June release. Continue below for all the details of those, and other comics updates:


With their clash with the Tholian Assembly still fresh in their minds, the crew of the Enterprise, along with their new Tholian passenger, encounter a strange new threat on a very familiar world. The final adventures of the five-year mission continue!

Two covered are promised for what sounds like the start of a new arc in the new TOS ongoing series. The A cover will be from Stephen Thompson, while J.J. Lendl continues to provide retail incentive designs for the series. The latter is the only one so far previewed: 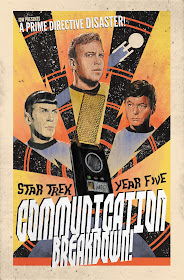 The Q Conflict #6
Written by Scott and David Tipton, with art by David Messina


This is it—the grand conclusion of the biggest Star Trek crossover ever. As the godlike beings prepare for the final round of their games, the captains have their own surprise in store for their powerful tormentors—and they’re taking it all the way into the Q-Dimension!

The final issue of this series follows the pattern of previous issues, with both the A and B covers from David Messina, and a retail incentive cover from George Caltsoudas. So far we only get to see cover A, which like most of the other Messina pairs this series seems to form a diptych with the as yet unseen B cover: 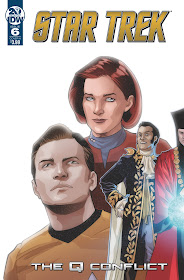 In other Q Conflict updates, George Caltsoudas did recently reveal his gorgeous cover artwork for issue four in the series: 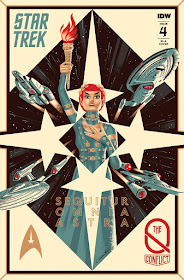 While David Messina has made his original art from issue one available to buy on Cadence Comic Art, including this impressive splash page: 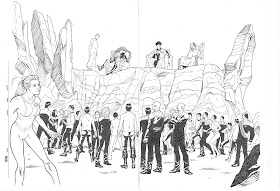