A few books bits today, including first details of several new books. Continue below for that, but first we've got some new information on David Mack's next book, Collateral Damage.

The TNG novel is now set for release in October. As the new blurb mentions, it will be focusing on Picard in the aftermath of the exposure of Section 31 in Mack's Section 31: Control, and will also be a follow up on Mack's older TNG book A Time to Heal, in which the crimes alluded too below occurred:


From the New York Times bestselling author of Star Trek: Discovery: Desperate Hours comes an original, thrilling novel set in the universe of Star Trek: The Next Generation!

The past returns to haunt Captain Jean-Luc Picard—a crime he thought long buried has been exposed, and he must return to Earth to answer for his role in a conspiracy that some call treason. Meanwhile, the U.S.S. Enterprise is sent to apprehend pirates who have stolen vital technology from a fragile Federation colony. But acting captain Commander Worf discovers that the pirates’ motives are not what they seem, and that sometimes standing for justice means defying the law….

Mack also noted some things to look forward to when discussing the book in a recent tweet:


I'm trying some stylistic experiments this time, just for the hell of it. Themes in this book: How should superpowers provide disaster relief, and, What constitutes treason?

In more mysterious news, listings have appeared online recently for another new book, as yet untitled, currently listed as "Untitled ST". It's listed as a Pocket Books Star Trek book, but other than a release date of mid-December this year there are so far no other details.

Other new listings reveal some new non-fictions books - That's books in the lowest terms, as these two new releases from RP Studio seem to be more homewares packaged as books! Coming in September are the Star Trek Starships Coaster Book: Set of 6 Collectible Coasters, and Star Trek Pop-Up Notecards: 10 Notecards and Envelopes, both of which are presumably what the titles say! 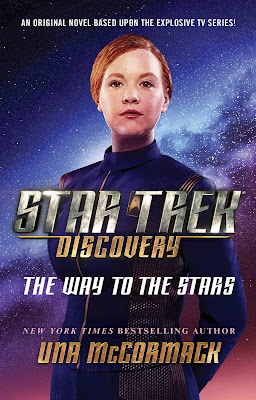 In other books news, TrekCore posted an interview with Una McCormack discussing her recent Discovery novel, The Way to the Stars. They talked a little about how she came into the project and it's links to the Short Treks episode Runaway:


I was approached to write a coming of age story, which would take Tilly from a privileged — but quite sheltered — background through to her decision to try for Starfleet. Within that, I had quite a lot of freedom.

Her mother’s character was already well established [for “Runaway”], but we came up with the rest of her family background together in the process of developing the book.

And also about the real world influences on the book:


I taught for a long time at a very prestigious university where students had often had huge material advantages. They had huge confidence about their abilities, big ambitions, and the ability — and resources — to turn those ambitions into reality.

At the same time, they were often very worried about failure, and making mistakes, and not ‘getting on’. There was also often a lot of pressure to follow parental expectation rather than trying something more radical or less familiar. I thought a lot about these students when I was trying to imagine Tilly and her cohort.

As well as how the novel explores the Star Trek universe beyond Starfleet:


It’s nice to see more of the Federation than Starfleet, isn’t it?!

I always enjoyed the glimpses of everyday life that we saw in DS9, for example. Not just going back to Earth and seeing the President, and so on, but the time we spent in Joseph Sisko’s restaurant. Most people must have practically nothing to do with Starfleet on a day-to-day business. They’re just getting on with their lives.

What is interesting for me as a writer is seeing how people might live in what is basically a utopian society. Federation citizens don’t really experience material lack, but they still have families, and relationships, and have to grow to maturity and so on.

I’m also interested in the interface between the Federation and worlds that don’t have the same resources and wealth. Tilly’s encounter with such a world in the book is a game-changer for her.

You can read the full interview on TrekCore.