Got lots of Discovery updates today, with previews of this week's episode, Light and Shadows, and more on last week's The Sound of Thunder. But first, the big news of the week is that Discovery has been officially renewed for a third season - Which is hardly surprisingly given the numerous mentions to plans being afoot for that eventually, but it's still good news it's definitely happening! No info yet on when the season will start or how many episodes it will have.

Along with that announcement, Discovery writer Michelle Paradise has been made co-showrunner for season three, working alongside Alex Kurtzman who took on that role on his own for the second season. Here's what Kurtzman had to say about that when talking to The Hollywood Reporter:


Michelle joined us midway through season two and energized the room with her ferocious knowledge of Trek. Her grasp of character and story detail, her drive and her focus have already become essential in ensuring the Trek legacy, and her fresh perspective always keeps us looking forward. I’m proud to say Michelle and I are officially running Star Trek: Discovery together.

Naturally CBS have released a little announcement video for this news too:


Coming back to the present, this week's new episode is set to finally bring (adult) Spock into the show in person, as you can see in the trailer here (also available higher res on StarTrek.com):


As ever CBS have also released a gaggle of stills from the episode, which this time are a very diverse range of characters and settings - Should be a busy episode! 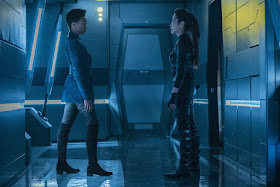 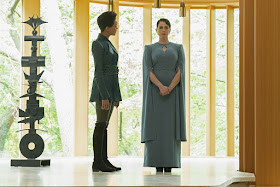 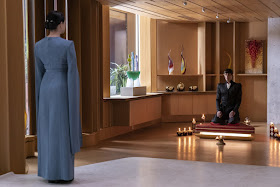 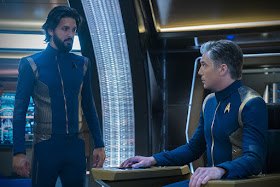 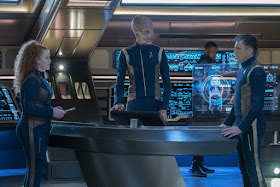 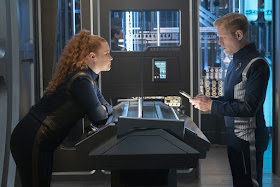 There aren't any extra images from The Sound of Thunder (probably because so many were released in advance of that episode), but there is a new featurette focusing on Saru and Kaminar (geolocked alas):

Naturally Doug Jones was the chosen guest for this week's episode of The Ready Room, which you can watch here via Facebook, or on YouTube if you prefer.