IDW have released their January solicitations, which include three new Star Trek books, and an omnibus. They pre-announced most of this month's big event releases a week or so ago, but did save one nugget of news for the solicitations; the Transformers crossover has been extended an extra issue! Continue below for all the details of the month's releases:

Star Trek vs. Transformers #5
Written by John Barber and Mike Johnson, with art by Philip Murphy


The stunning conclusion! As the Klingon-Decepticon alliance prepares to wipe out their enemies once and for all, Kirk and the Autobots make one last desperate bid to merge Cybertronian technology with Starfleet ingenuity. It’s a final conflict you won’t want to miss!

As IDW proudly proclaim, "Demand was so high, we’re doing another issue!". This surprise extra issue in the crossover will be offered in at least three covers, with apparently only the battle-worn retail incentive cover by Chris Panda so far revealed. The A cover will be by Philip Murphy, and the B by Josh Burcham. 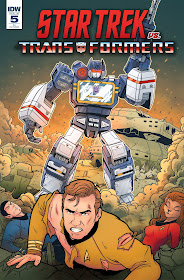 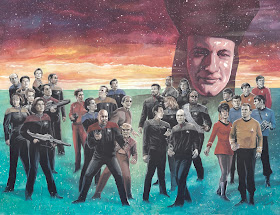 The Q Conflict #1
Written by Scott and David Tipton, with art by David Messina.


When a dispute between godlike beings threatens the galaxy, it will take all of Starfleet’s best captains to stop them. Join James T. Kirk, Jean-Luc Picard, Kathryn Janeway, and Benjamin Sisko as they go head-to-head in a competition that will determine the fate of the Earth and beyond. Will they be able to emerge victorious, or will they be torn apart by The Q Conflict? A soon-to-be-classic six-part miniseries begins here!

This book will be offered in at least four covers, with both the A and B by David Messina. Retail incentives will be available from George Caltsoudas and J.K. Woodward; the latter is the only art we've seen so far, released when the series was announced. 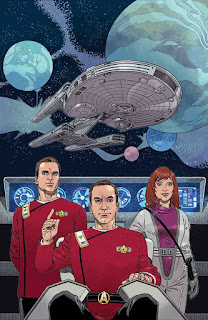 
Twenty years before he took command of the U.S.S. Enterprise-D, Jean-Luc Picard sat in the captain’s chair of the U.S.S. Stargazer. Picard served with distinction aboard the Stargazer for many years on his way to becoming the most respected captain in Starfleet. But in this early mission, Picard showed that even he is merely a man.

This one shot will be offered in two covers, one by J.K. Woodward, and a retail incentive by Gabriel Rodriguez. I believe the later is probably the artist of the cover art which was previously released when this series was announced too. 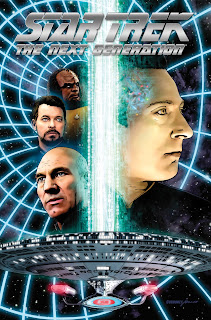 
Follow the intergalactic adventures of Captain Jean-Luc Picard and the crew of the U.S.S. Enterprise-D as they explore new worlds. Collects The Space Between, Intelligence Gathering, Last Generation, Ghosts, and Hive.

This is an advance solicitation for March release (which we've actually known about for some months thanks to even more advance online retailers!)


To keep track of all the latest Star Trek comic releases, hit the comics button on my 2018 schedule page. You can also find reading lists for several Star Trek comic series on my Trek Collective Lists site.