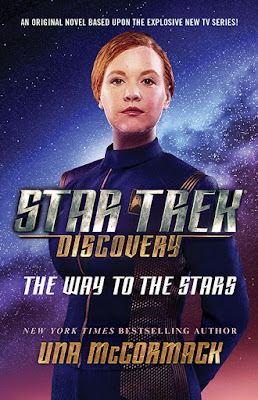 Simon and Schuster announced the details of the first 2019 Star Trek novels a week or so ago, and have now released updated blurbs for them too. Continue below for new details of these new books.

Before that though, there is a new detail on the format too, as listings for these books reveal they are all to be released as trade paperbacks (as well as ebooks) - That's the larger format paperback published by Gallery Books, which previously was used to release additional titles on top the the monthly released smaller mass market paperbacks from Pocket Books (both Pocket and Gallery are imprints of Simon and Schuster). All the previous Discovery novels have been released in this format, but it would appear this will now be the standard across the entire Star Trek novel range.

With only three novels so far announced for 2019, it remains unclear if a monthly release cycle will resume or not. Also not yet revealed is whether these books will get audio releases, although in the last couple of years it has become increasingly common for Star Trek novels to get simultaneous audio editions, so I'd be surprised if most if not all did get that treatment.

Anyway, the new blurbs! In reverse order, the furthest away, coming in April, is Dayton Ward's TNG book, Available Light, which picks up after his own previous TNG adventure, Headlong Flight, and the fallout of David Mack's Section 31: Control.


Section 31, the covert organization which has operated without accountability in the shadows for more than two centuries, has been exposed. Throughout the Federation, the rogue group’s agents and leaders are being taken into custody as the sheer scope of its misdeeds comes to light. Now Starfleet Command must decide the consequences for numerous officers caught up in the scandal—including Admirals William Ross, Edward Jellico, Alynna Nechayev, and Captain Jean-Luc Picard who, along with many others, are implicated in the forced removal of a Federation president.


In March we have The Antares Maelstrom, a TOS TV-era book by Greg Cox:


The final frontier erupts into chaos as vast quantities of a rare energy source are discovered beneath the surface of Baldur-3, a remote planet beyond the outer fringes of Federation space. Now an old-fashioned “gold rush” is underway as a flood of would-be prospectors, from countless worlds and species, races toward the planet to stake their claim. The galactic stampede threatens the stability of neighboring planets and space stations, as widespread strife and sabotage and all-around pandemonium result in a desperate need for Starfleet assistance. Captain James T. Kirk and the crew of the Starship Enterprise are dispatched to deal with the escalating crisis…which lies on the other side of a famously perilous region of space known as the Antares Maelstrom.


And finally, the first book of 2019, in January, will be The Way to the Stars, a Tilly focused Discovery book by Una McCormack. There isn't actually a new blurb for this one, the first one released is the same, but here's a reminder of it anyway:


Despite being an inexperienced Starfleet cadet, Sylvia Tilly became essential to the U.S.S. Discovery finding its way back home from the Mirror Universe. But how did she find that courage? From where did she get that steel? Who nurtured that spark of brilliance? The Way to the Stars recounts for fans everywhere the untold story of Tilly’s past.

It’s not easy being sixteen, especially when everyone expects great things from Tilly. It’s even harder when her mother and father are Federation luminaries, not to mention pressing her to attend one of the best schools that the Federation has to offer. Tilly wants to achieve great things—even though she hasn’t quite worked out how to do that or what it is she wants to do. But this year, everything will change for Tilly, as she about to embark upon the adventure of a lifetime—an adventure that will take her ever closer to the stars….


To keep track of all the latest Star Trek book releases, hit the books or prose buttons on my 2018 and 2019 schedule pages. You can also find series reading lists and author bibliographies on my dedicated Star Trek lists site.