Wizkids and Lonney Labs have both announced new Star Trek card games on the way, continue below for all the details.

Wizkids' latest release with be a Ferengi themed Galactic Enterprises, designed by Christophe Boelinger. They are planning to release in June, and this is how they describe it:


In Star Trek: Galactic Enterprises, 3 to 8 players will buy and sell their wares, trying to monopolize one particular product in order to gain greater profit. However, once other Ferengi get those same items for sale, it becomes a matter of who’s the better negotiator. Do you work together to gain the same profit, or do you agree to cooperate, then sell at a lower price to steal all the profit for yourself? Be wary of special action cards that can mess with your business and remember the Ferengi Rules of Acquisition in order to gain the most return for your investments. 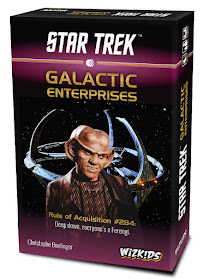 Meanwhile Looney Labs are working on two Star Trek versions, TOS and TNG, of their existing card game called Fluxx, due for release in August. Here's a general overview of the game from their press release:


Fluxx is a card game with ever changing rules! The game play starts out simple: draw one card and play one card – but New Rule cards quickly make things chaotic. Even the object of the game will often change as you play, as players swap out one Goal card for another.

TrekCore have great coverage of the game from the recent New York Toy Fair, including a video discussing how it works, plus a look at mock-ups of the cards (using placeholder art). 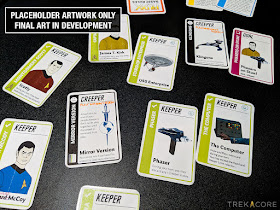