IDW's May Star Trek comics (lots of them!)

IDW have released their solicitations for May, and it's a huge month for Star Trek. In addition to the latest Discovery comic and an omnibus, the month will see the release of an entire miniseries, with a second visit to the TNG version of the mirror universe, following on from Mirror Broken, to be released weekly. Continue below for all the details.

Through The Mirror #1
Written by Scott and David Tipton, with art by Chris Johnson, and J.K. Woodward


Because you demanded it! Following up the smash-hit miniseries MIRROR BROKEN, the Mirror Universe Next Generation crew is looking for new worlds to conquer, and they’re crossing over to the Prime Star Trek Universe to find them!

Also in each issue: Just how did the Mirror Universe crew find their way to ours, and what does Emperor Spock have to do with it? Backup stories every issue illustrated by MIRROR BROKEN co-creator J.K. Woodward!

The main story in this series will be illustrated by a different artist each issue, who will also be proving the B cover for their respective issues. Meanwhile, as the blurb describes, J.K. Woodward provides a secondary story, as well as the A covers for each issue, which connect to form one massive image (see the whole thing below). Additionally there will be variant character portrait covers by Peter McKinstry, and photos covers too.

So far IDW have released the A cover and photo cover for each issue, plus the McKinstry covers for the first two issues. 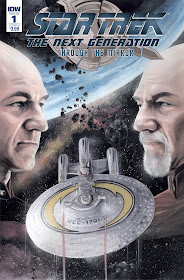 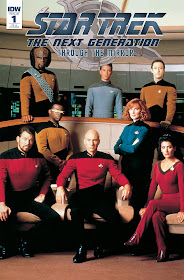 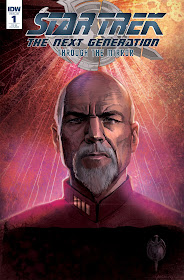 Through The Mirror #2
Written by Scott and David Tipton, with art by Marcus To and J.K. Woodward.


When the Enterprise-D discovers a burned-out, pillaged Andorian vessel, the search for the culprits behind it leads to some startlingly familiar faces! 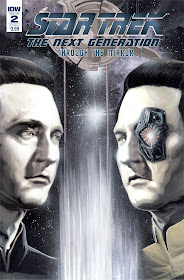 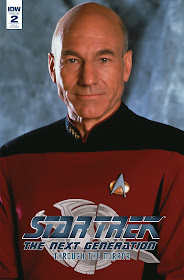 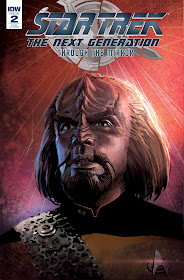 Through The Mirror #3
Written by Scott and David Tipton, with art by Josh Hood and J.K. Woodward.


It’s interstellar espionage aboard the Enterprise-D when the Mirror Universe crew infiltrates Captain Picard’s ship! What are they up to? The answers are here! 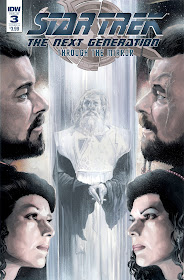 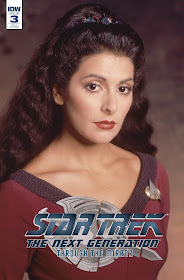 Through The Mirror #4
Written by Scott and David Tipton, with art by Carlos Nieto and J.K. Woodward. 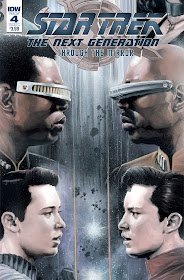 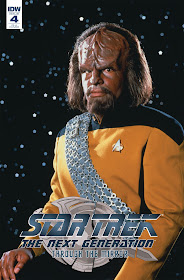 Through The Mirror #5
Written by Scott and David Tipton, with art by Debora Carita and J.K. Woodward.


Can Captain Picard prevent his Mirror counterpart’s plans for galactic conquest? It’s the explosive finale to THROUGH THE MIRROR! 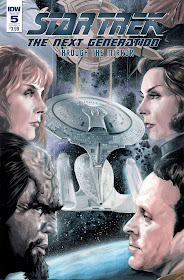 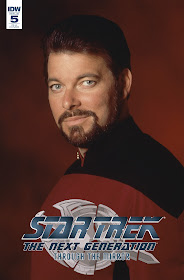 Interestingly, the solicitations also state that this series:


Sets up a new and exciting chapter in the Star Trek: Next Generation universe! More to come this year!

Which presumably means there's even more TNG mirror stuff to come - The first series must have sold really well!

J.K. Woodward has posted a blog about the creation of his huge connected cover, including this look at how it all joins up:

There's load more to see on the blog, including concept sketches, and details of each individual cover. What really impressed me was how it was in part actually made as one massive image. Crazy! 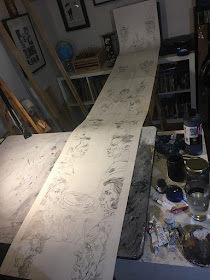 Succession #2
Written by Mike Johnson and Kirsten Beyer, with art by Angel Hernandez.


In this, the second DISCOVERY miniseries from IDW Publishing, your favorite characters from the hit CBS All Access series dive into an adventure tied directly into the second half of the first season—out now!

This book will be offered in at least four covers, including an A cover by Angel Hernandez, and a photo B cover. Declan Shalvey and Jordie Bellaire will provide one of their ship covers as one of the retail incentives, while Elizabeth Banks has made another. And that last cover is the only one we have so far seen, shared by IDW last week. It features a rather glorious rendition of Emperor Georgiou, and you can see the artwork sans titles on IDW's Tumblr. 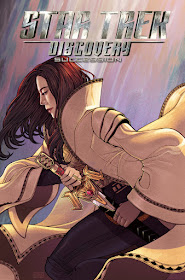 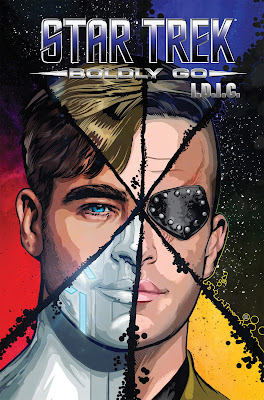 Finally, we also have an advance solicitation for the June release of the latest omnibus book.


What if Kirk and the Enterprise crew were robots? What if Klingons founded Starfleet? What if Spock wasn't Vulcan? What if all these realities collided? The Star Trek mega-event “I.D.I.C.” brings together all of these worlds for one huge, universe-threatening adventure.

The Vulcan philosophy of celebrating “Infinite Diversity in Infinite Combinations” is one of acceptance, but can the universe accept the simultaneous existence of multiple realities? It's a team-up for the ages as numerous incarnations of Kirk, Spock, and the Enterprise crew must work together to stop a foe that threatens all of existence! Featuring the return of Jane Tiberius Kirk and her gender-swapped crew! Collects the entire “I.D.I.C.” storyline from Star Trek: Boldly Go #13–18.