IDW have released their solicitations for April, which include two new Star Trek comics, plus an omnibus book. Continue below for all the details, on those, and other Star Trek comic updates.

The big news is start of IDW's second Discovery miniseries:

Succession #1
Written by Mike Johnson and Kirsten Beyer, with art by Angel Hernandez.


In this, the second Discovery miniseries from IDW Publishing, your favorite characters from the hit CBS All Access series dive into an adventure tied directly into the second half of the first season!

If the blurb wasn't hinting clearly enough, editor Sarah Gaydos has confirmed this is a mirror universe story.

This first issue will come in at least four covers, with the A cover by issue artist Angel Hernandez, and a photo B cover. George Caltsoudas will also be providing a variant cover, and Declan Shalvey and Jordie Bellaire will be continuing their ships of the line cover series from the first Discovery miniseries into this series too. But, none of these covers have yet been revealed!

New Visions #21: The Enemy of My Enemy
By John Byrne


The enemy of my enemy… is not my friend. But Kirk and Kor find themselves forced to work together against a common foe. Alliance, or a chance for deadly betrayal? 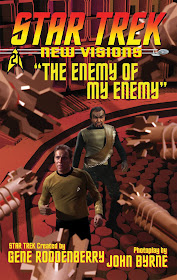 
There's a backup story featuring Captain Pike and his crew, and that made for some complicated building. As before, I set my tale a few years after "The Cage", so I'm using the "older" Spock from "Where No Man has Gone Before", and also Scotty, Kelso and Dr. Piper from the same episode. 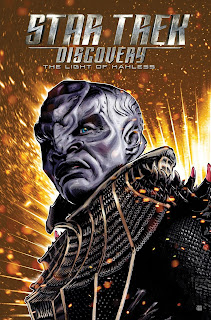 Also listed in this batch of solicitations is the omnibus edition of the first Discovery miniseries, listed in advance of a May release (although Amazon currently have it down for July).

The Light of Kahless omnibus
Written by Mike Johnson and Kirsten Beyer, with art by Tony Shasteen.


Journey back in time to a decade before Captain Kirk and the Enterprise set out on their five-year mission, when the United Federation of Planets is locked in conflict with the mysterious Klingon Empire. But just who are these formidable foes? Delve into the shocking world of the Klingons in a story you can only find in this miniseries, which ties directly into the show.

Also from that series, Tony Shasteen posted his artwork for the issue three cover, featuring Kol, including his initial sketch version, which looks awesome with that stark splash of red: 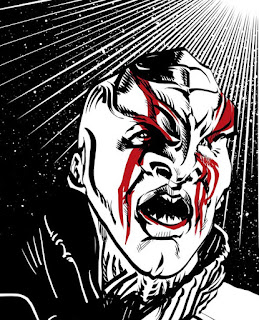 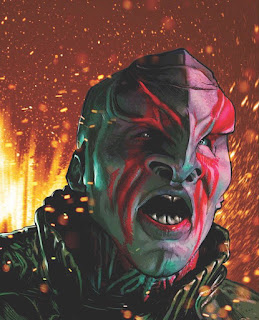 Finally, Eoin Marron‏ has now shared his finished artwork for Boldly Go #18 (the final issue in that series), a lovely image of the Enterprise-A under construction:
. 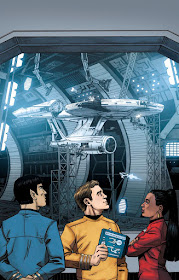