IDW have released their January solicitations, which include two new Star Trek comics, plus an omnibus book. Continue below for the details:


"I.D.I.C." Part 4 of 6! The epic voyage through the Star Trek multiverse continues, as the villain behind it all is revealed... and their vendetta against Captain Kirk threatens to end all realities!

This book will be offered in at least four covers, with the regular one, featuring a myriad Spocks, from Angel Hernandez. The B cover is by Mike Martin, and is part of a series inspired by Funko Pop! vinyl figures, which will run across multiple IDW titles this month. There's a variant cover by Yoshi Yoshitani (not yet revealed). Plus a retail incentive photo-cover. 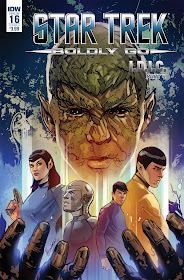 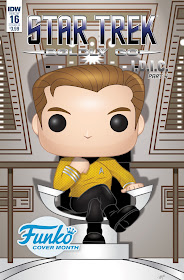 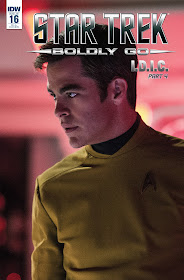 Discovery #4
Written by Mike Johnson and Kirsten Beyer, with art by Tony Shasteen.


The tie-in series to the blockbuster new show concludes! The Klingon leader T'Kuvma embraces his destiny and fights to unite the many Houses of the Klingon Empire... ultimately leading to epic conflict with the Federation!

This book will also be available in four covers, and not single one of them has been released yet! The main one comes from Tony Shasteen, while the B cover is a photo-cover. There's a variant by Angel Hernandez, and a Ships of the Line cover by Declan Shalvey and Jordie Bellaire


Presenting all-new tales set in the Star Trek: The Original Series universe, done in a unique, one-of-a-kind photomontage style, using images from the classic TV series. It's as close as fans will ever come to getting new episodes featuring the original cast. Includes the stories “The Traveler,” “Time Out of Joint,” and “All the Ages Frozen.” Collects issues #15–17.

This is an advanced solicitation for a February release. 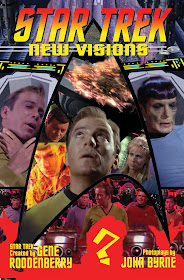