Blurb for second Discovery novel, and other Dayton Ward updates 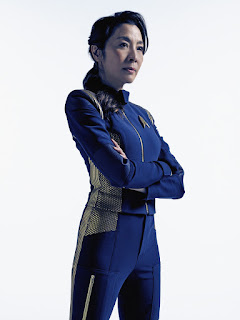 The blurb for the second Discovery novel, which we now also know will be titled Drastic Measures, has been released by StarTrek.com. Written by Dayton Ward, the book is due out in February, and as the blurb reveals, will focus on a key moment from Star Trek history: The Tarsus IV massacre.


It is 2246, ten years prior to the “Battle at the Binary Stars,” and an aggressive contagion is ravaging the food supplies of the remote Federation colony Tarsus IV and the eight thousand people who call it home. Distress signals have been sent, but any meaningful assistance is weeks away. Lieutenant Commander Gabriel Lorca and a small team assigned to a Starfleet monitoring outpost are caught up in the escalating crisis, and bear witness as the colony’s governor, Adrian Kodos, employs an unimaginable solution in order to prevent mass starvation.

While awaiting transfer to her next assignment, Commander Philippa Georgiou is tasked with leading to Tarsus IV a small, hastily assembled group of first responders. It’s hoped this advance party can help stabilize the situation until more aid arrives, but Georgiou and her team discover that they‘re too late—Governor Kodos has already implemented his heinous strategy for extending the colony’s besieged food stores and safeguarding the community’s long-term survival.

In the midst of their rescue mission, Georgiou and Lorca must now hunt for the architect of this horrific tragedy and the man whom history will one day brand “Kodos the Executioner”….

Sounds like we'll be getting some welcome background on both the new captains, and maybe even a team-up!

Dayton Ward was recently interviewed by Tony Healey, where among many other aspects of his writing, he spoke a little about his work on Discovery:


I knew for months before contracts were signed that I’d be writing the second book, and even during that period Kirsten Beyer would call me on occasion to discuss some bit of Star Trek lore or trivia. One of my favorite examples of this is the day Kirsten called me and without even offering a, “Hello,” began the call by saying, “I have a Star Trek emergency.” We’d spend hours on the phone talking about such things, and I knew she was taking bits of these conversations back into the room as they continued to work on scripts. So, maybe in some small way, I may even have contributed to the show’s development. It’s things like that which truly make this job fun.

Meanwhile, in other Dayton Ward news, he has also recently been listed as the author for a series of Incredibuilds book and model sets from Insight Editions. Each set includes a laser cut wooden model kit, and a 32 page book about the subject ship. On offer from next June will be the USS Enterprise and USS Enterprise-D, with both offered in a "deluxe format" and the TOS Enterprise also offered at a lower price point not-deluxe version - Quite what the difference is eludes me; in Incredibuilds sets based on other series the standard and deluxe versions feature paperback and hardover books respectively, but so far both editions of the Star Trek kits are listed as hardcover.

The blurb for each of the sets is near identical, so I'll just share here the TOS version:


Build your own U.S.S. Enterprise with this IncrediBuilds™: Star Trek model kit, featuring a full-color book with facts and trivia on one of the most iconic starships in history.

Get ready to boldly go where no one has gone before with this exciting Star Trek wood model set. The deluxe 32-page hardcover book is packed with information on the U.S.S. Enterprise, from its basic capabilities to its pivotal role in the Star Trek universe. Complete with stunning imagery and behind-the-scenes content, this book and model set is a must have for any Star Trek fan. The wood model is easy to assemble and snaps together to form a dynamic, displayable 3D version of the Enterprise that fans will love.


Gallop around the cosmos and celebrate the legacy of one of the most iconic and beloved sci-fi franchises with Star Trek: The Official Poster Collection.

In 1966, Star Trek dared to boldly go where no man had gone before, launching one of the one of the most beloved and longest-running sci-fi franchises of all time. This official poster collection includes 32 removable posters featuring imagery from the iconic series and movies. Now fans can proudly display images of their favorite characters across the franchise, such as Captain James T. Kirk, Spock, Uhura, Worf, Captain Jean-Luc Picard, and more!

You can find more information about various Star Trek book series on Trek Collective Lists, including a Star Trek bibliography of Dayton Ward.