It's a big day for Discovery, with the release of the first trailer for the series (not counting the little teaser last year), stills, and a poster! CBS have also announced the first season will now have fifteen episodes, two more than the previously planed thirteen. And if that's not enough new Trek for you, there will also be an after-show program called Talking Trek!

There's lots to drink in, so continue below for a closer look. First up, here's trailer (the first version is region locked to the US, but here's a link to an unofficial version anyone can watch):

But there's also an international version from Netflix, with a completely different edit, a little less footage, and a few snippets not in the US version:

Continue below for a closer look at everything in the trailers. But first. here are the first gaggle of official stills too.

It is fantastic to see in both the trailers and stills that two women of colour are headlining this series - I remain a little concerned about the overall representation in the series, but this is a great start!

It is also exciting to see such lavish treatment for Star Trek, this looks like footage from a movie, and the Klingon design especially looks incredibly intricate.

Here's the new poster, which includes a tiny USS Discovery (notably absent from the trailer): 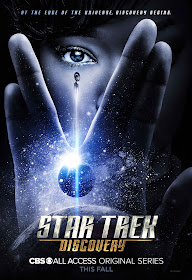 And here's an animated version of said poster!

Live long and prosper. #StarTrekDiscovery
A post shared by Star Trek: Discovery (@startreknetflix) on May 17, 2017 at 3:25pm PDT

Now lets take a closer look at the new footage. The desert scenes dominate the start of the trailer, and its clear from the wide shots Burnham and Georgiou are there quite alone. They discuss how Burnham has been serving under the captain of the USS Shenzhou for years; which would seem to suggest her posting on the USS Discovery is yet to come at this point in the series.

Later in the trailer there is another planet shot, I assume to be the same desert, although it does have a much bluer colour caste; could this be a different adventure?

There's also this rather desert toned alien, which looks great!

I guess they weren't all that alone though, as eventually the captain pops out her communicator (check out that classic flippy communicator!) and beams right up; complete with an interesting new skin-hugging transporter effect.

And then we meet the USS Shenzhou, apparently flying into the skies of the desert world.

We also see her at warp.

And here's a really nice literal flip of expectations; the bridge appears to be on the underside of the saucer! Complete with nuTrek style window/screen!

We get to glimpse many of the Shenzhou crew, including several interesting new aliens - All dressed in blue; and hang over from the 22nd century style maybe?

Meanwhile Burnham appears to know Sarek well enough to be having a chat. It looks almost like daylight coming in the windows in these shots; I wonder when and where this happens?

And here's an interesting couple of shots. Was Burnham brought up a Vulcan?? Is non-hologram Sarek from that period in her life?

Burnham's relationship with Captain Georgiou dominated much of trailer, and from the odd shouty moment it's clear it's not always entirely harmonious. I love that throughout the trailer Georgiou comes across as a very calm and collected leader.

The other major character featured is Saru, who can apparently sense death!

Death by Klingon maybe? A plot points appears to be that the Shenzhou discovers something Klingon, and Burnham jetpacks over to check it out (very Motion Picture-esque).

She finds a mysterious something and a rather menacing Klingon also hanging out in space!

Inside the Klingons are looking very ceremonial, and amazingly ornate! This all seems to be centered around a sarcophagus; containing who? Whoever it is, I take it they died recently, as the Klingons are busy performing their death ritual.

At some point this whole affair appears to turn into conflict, with multiple Klingon ships appearing.

I'm rather curious about what exactly happens, including a bright flash and pain inducing sound; maybe not your typical space battle?

At some point at least it seems Burnham is injured, as one shot shows her appearing to undergo some sort of medical procedure.

In addition to the in-universe footage, the Netflix trailer also includes a few extra beauty shots of the incredible Klingon spacesuit:

I find this all very exciting and impressive. They've not given too much away story-wise here, but have revealed an amazing production and started to let us know about some of the characters; I am particularly taken by Captain Georgiou - Given the series is named for the USS Discovery, I really hope she and the Shenhzou do survive this encounter with the Klingons!

Star Trek: Discovery is due to start this autumn, and it will be distributed almost everywhere in the world on Netflix, except for the US where is will be available on CBS All Access, and Canada where it will be on Bell Media channels and services. To keep track of all the latest details from the new show, visit my Star Trek: Discovery guide page.