The Star Trek: Discovery panel at this weekend's Star Trek Mission: New York convention revealed some exciting news for us Star Trek tie-in fiction fans: As I'm sure many anticipated, the series will see Star Trek novels and comics published to tie-in, but in a new move for Star Trek, those stories are being developed in tandem with the production of the series, coordinated by Voyager novelist and Discovery writer Kirsten Beyer, and to be ready for release alongside the series early next year.

The first prose story, published by Simon and Schuster of course, will come from David Mack (of Destiny, Vanguard, and so much more renown), while IDW's new comic series will be written by Mike Johnson (switching timelines from his usual role as the writer of almost every Kelvin timeline comic).

While it's not clear exactly how much each medium might bounce off the other, it certainly sounds to me from the brief remarks that this will be a somewhat different approach to Star Trek tie-in fiction than usual - Having some degree of multimedia coordination, when normally the novels and comics trail behind some time later following wherever on-screen Trek leads.

It might even sound somewhat reminiscent of what Disney are doing with Star Wars tie-ins these days, with Kirsten Beyer existing in the role of Lucasfilm's "story group". Indeed this kind of cross platform vision for Star Trek is what Bad Robot were hoping to launch when they took over the movie arm of Trek - But they only got so far as having the many comics, and one video game (and of course several Kelvin timeline novels were sacrificed along the way).

And for anyone concerned, Kirsten Beyer apparently also confirmed she will be continuing with her wonderful Voyager novels alongside her Discovery writing. Yay.

Continue below for further remarks on Discovery from Beyer, and fellow Discovery writer and panel member Nicholas Meyer. 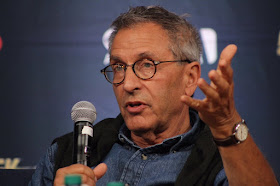 Among those remarks both writers asked fans to keep an open mind, and I think Meyer, having previously killed off Spock in The Wrath of Khan, had the greatest insight into this:


Lower your expectations. If you go into our show with open hearts and open minds, then you may be rewarded.

In all due respect, fans do not know what is best for them.

He recalled the negative reaction to Spock's death back in the day, something that is of course now regarded as one of the greatest moments in Star Trek.


The question to me about killing Spock wasn't whether to do it, but it was whether we could do it well. 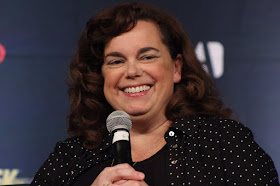 And Star Trek will as every strive to try and keep the world's mind open, when asked about a possible Muslim character, Beyer noted:


The spirit of inclusion in Discovery doesn't only refer to sexual orientation.

And of course we can expect to look beyond humanity, as has already been teased:


There will be new aliens and interesting life forms, some as part of the main cast.

Meyer noted another classic element of Star Trek that will continue: Stories that reflect the issues of the day:


All art is product of the time in which its created. Our show will be a product of 2016.

There are no shortage of current events that raise questions, like ISIS. What does it mean to not be able to negotiate with a foe?


The most important part [of Star Trek] is the sense of optimism without painting too pretty of a picture.

Quotes, notes, and images live from the event came via the Star Trek, TrekNews, and TrekMovie Twitters, plus TrekCore's report.

Star Trek: Discovery is due to start in January next year, it will be distributed almost everywhere in the world on Netflix, except for the US where is will be available on CBS All Access, and Canada where it will be on Bell Media channels and services. To keep track of all the latest details from the new show, visit my Star Trek: Discovery guide page.