CBS and Paramount have announced a new mega box set release, Star Trek 50th Anniversary TV and Movie Collection, which will uniquely include all of the TOS Star Trek adventures. The thirty disc set, due out in September, will bring together the entire original TV series, all six TOS movies, and for the first time on bluray, The Animated Series as well!

In addition to all the previous bluray extra features (some twenty hours worth), the set features a new two-hour documentary, and also comes with a 50th anniversary logo pin, and a set of six mini-poster cards featuring art by Juan Oriz inspired by all the TOS movies. And of course it all comes in snazzy packaging, complete with glittery transporter effect cover, and some really nice new disc art. 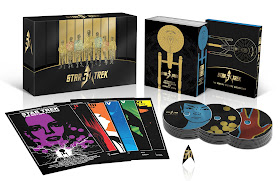 While TAS is new to bluray, the rest of the set is familiar content from previous releases - The Wrath of Khan is the most up-to-date version, the just released newly remastered Director's Cut.

The new documentary Star Trek: The Journey to the Silver Screen, is split into five parts (one of which was the new segment on the new Wrath of Khan release). Those are:
There is no news yet on whether we will get a separate release of TAS, but surely it is inevitable, even if it doesn't come too quickly in order to give this set some time to sell with TAS's inclusion as its unique appeal. Given the new documentaries appear to be focused exclusively on the movies I'd not be too surprised to see them packed off with yet another re-release of all the movies on their own too!