It seems the US isn't the only place issuing Star Trek postage stamps this year, as both Palau and Guyana have just (on the last day of 2015) released sets of Deep Space Nine stamp designs.

The Palau issued stamps are focused on the ships of DS9. One set of six features various prominent designs from the series, arranged on a miniature sheet as if they were all flying around the station. There's also a single panoramic format stamp featuring the USS Defiant, released separately. 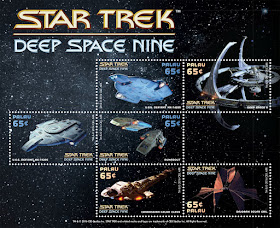 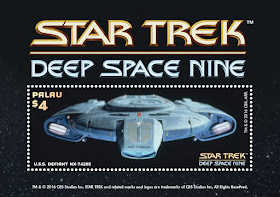 Meanwhile Guyana have focused on the characters, with a similar partner of releases. Their panoramic stamp features Jadzia Dax and Benjamin Sisko, while other key characters join them in a set of six individual character stamps. 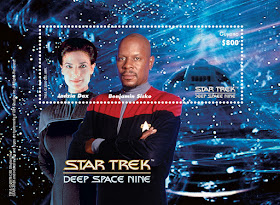 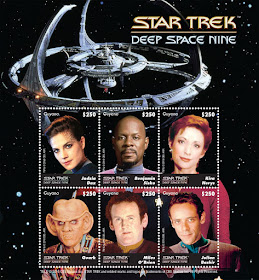 All images from the Inter-Governmental Philatelic Corporation, which where they are also all available to buy.

These are not the first Star Trek stamps from either country, previously Palau have released several TNG stamps, while Guyana marked the release of Generations with numerous designs. You can see those, along with all the other Star Trek stamps released over the years from all over the world, in my latest Trek Collective list.