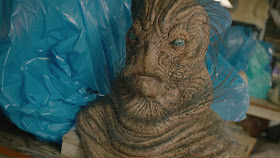 Last week Omaze launched a fund-raising campaign tied to the production of Star Trek Beyond, which will see one person who donates win a walk-on role in the film, and six others getting a chance to visit the sets and meet the cast and crew. Now the first of those six winners has been announced (one person will be select each week of the campaign), and Omaze have released a new video to mark the occasion, including some behind-the-scenes glimpses from the production, such as this new alien!

Continue below for more updates from the production of Star Trek Beyond.

Here are a still of the other behind-the-scenes bits from the video: 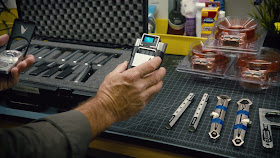 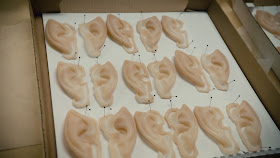 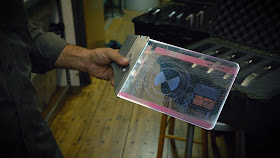 In other news, director Justin Lim will be reunited with one of the actors he worked with on Fast and Furious 6, Joe Taslim, who is also a martial artist. The Hollywood Reporter claim their sources say he will be "a key part opposite [Idris] Elba, who plays a villain".

Finally, Simon Pegg recently discussed his work on the script with New York Daily News, including a nice nod to Memory Alpha:


It's been a very truncated process because the timeframe was a lot shorter than we'd normally have. It's really forced us into action; you make use of the time you have.

When you write dialogue for any of those characters, it's a peculiar thing because you hear their voices in your head," he says. "In a way it's a great help because you're not really starting from scratch, you're not just working with a bunch of characters that you know well, but a fully formed, fully realized universe.

And I've got to say the Star Trek Wikipedia, Memory Alpha, which is online, has been so helpful. If you need to know what's inside of a photon torpedo, there it is online, because there are so many dedicated fans out there who have such a vast knowledge of the universe and the minutia of it.