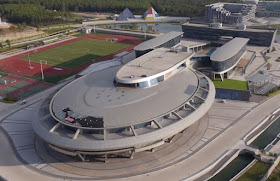 China has developed a bit of a reputation in recent building-boom-years, of creating some pretty, unique, buildings; some gloriously creative expressions of modern architecture, some just plain weird. There's lots of blobitecture, all sorts of quirky skyscrappers, and novelty buildings including giant gods, a big glass violin, and a huge stargate! That wondrous collection now includes a starship too, reportedly officially licensed by CBS no less!

Completed last year, but only just discovered by the western parts of the internet (thanks to Mashable), the new headquarters of NetDragon Websoft is modelled on a Star Trek starship. This is due to the company's chairman, Liu DeJian, being a huge Trekkie, and being in a position to indulge in this multi-million dollar extravagance!

It appears to be based on the Enterprise-E (as you'll see in the concept art below), but I'd say it's ended up with a bit of a Voyager feel too. As you can see from this drone video, the enterprising shape only really becomes obvious from above:

This building is just one of many being built by NetDragon Websoft on their campus site in Fuzhou, continue below for a look at the building in situ, and how its design evolution.

You can see here in this promotional map of the campus how the starship building sits among the others that have been built so far. There are still plans for more buildings on the site, which are to be situated mainly in existing clearings in the largely forested coastal location. The aim is to build a creative haven and technology hub, akin to some of the high-tech company bases in the US. It appears at one point in the design they were hoping for something much more faithful to the source material. You can see in this artwork posted by 17173, at point they had an almost straight recreation of the Enterprise-E in mind - Although look carefully, the forward edge of the saucer has already been turned into a bank of windows in this image: 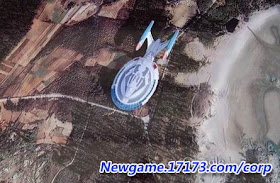 Eventually that became something a bit more impressionistic, but still quite recognisably the Enterprise-E: 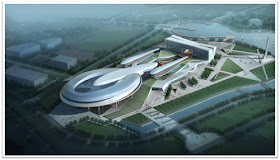 And then I guess reality got hold of the design and it turned into the finished building we can see above. 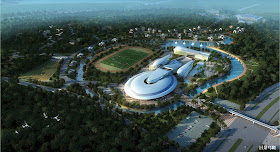 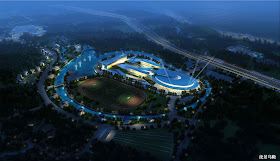 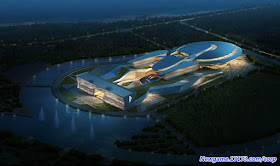 What I find quite interesting is that while they might have always wanted to do a starship, they didn't seem to think they could pull it off the whole time. According to the Wall Street Journal the realisation the building could be made starship-shaped came some way into its planning:


...executives didn’t make a building based on the Enterprise their first choice because much of it would have to be elevated. But one day, inspired by a poster for the franchise, they decided to put the giant ship on several columns, as if it had landed on the field for repairs.

I say that's interesting, because some of the other designs for the site also had a bit of a space ship look, but weren't so directly Star Trek-y. Open Architecture, who have worked on several other buildings on the site, had an almost flying saucer-like take on the building: 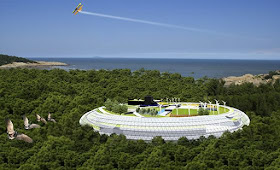 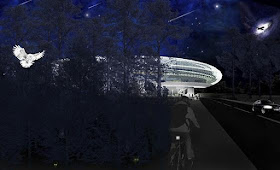 While AAUPC Chavannes and Associés took that even further, with a blobby shape with pods coming off the back, that has a not dissimilar layout to the final design, while being something much more original: 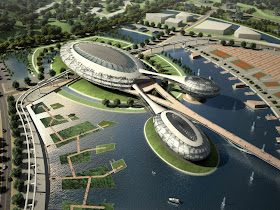 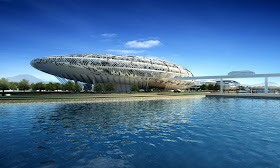 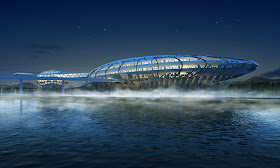 You can see in both designs the elevated main structure, which has followed through into the final building.

Meanwhile inside the building there are apparently Star Trek infused automatic sliding gates between work areas, plus huge metal slide to quickly get between floors (shall we call it a Jefferies tube?). Also, there is a T-Rex (cousin of the Voth right?). Image via Qiepa. 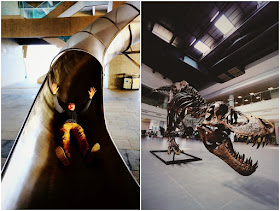 And if that's not enough to keep the employees entertained, elsewhere on the campus site you'll also find what appears to be a pirate ship, and this full-size X-Wing Fighter (via The Nanfang): 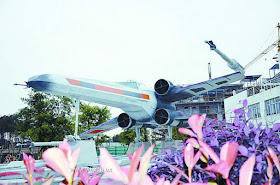