New from DST: A well armed Worf, and the USS Excelsior

The fourth figure in Diamond Select Toys Star Trek Select range, Worf, is currently finding his way to retailers, and to mark the release DST has released a collection of images to show off this TNG TV-era rendition of the character. This version of  Worf comes with a phaser, phaser rifle, bat'leth, and an assortment of arms to hold them in a variety of poses. So he is *pun warning* certainly well armed... He also has the option of different hair styles, and a display base sporting the Klignon logo. More images after the jump, as well as updates on DST starship models: 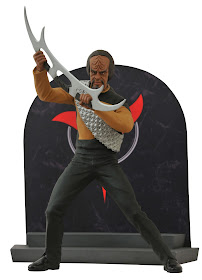 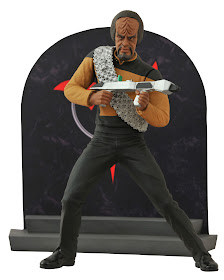 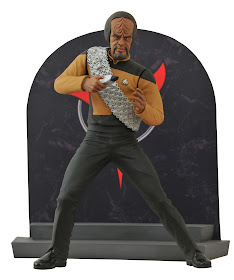 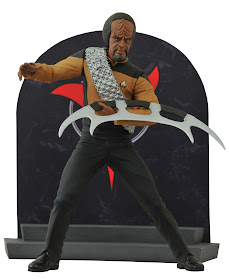 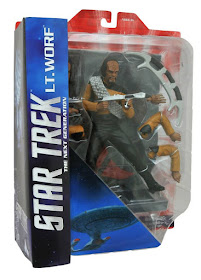 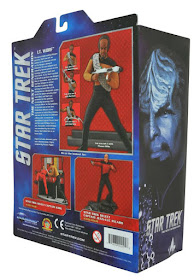 Worf is the second TNG figure in the Star Trek Select range, following Captain Picard. They join the previous TOS releases, of Kirk and Khan, and Spock and the Horta. DST have yet to announce which characters will be coming next, but do seem to suggest in answers to Q and As they post, that the Star Trek Select range will be the main form of Star Trek action figures they release, so hopefully that means there will be more, at some point.

Also due for imminent release is the long awaited original configuration of the Excelsior class, the USS Excelsior NX-2000. Last time I reported on this I was anticipating release last November, so I guess a certain Scottish engineer's tinkering might have caused some delays in the launch! DST have released a new video to demonstrate the light and sound features on the model:

If you're not a fan of Captain Styles, this is the fifth variation of the Excelsior class DST have released, so you also have the option of Captain Sulu of the NCC-2000, or Captain Harriman of the USS Enterprise-B, both of which have also been offered in battle damaged variants.

DST's plans for future ships are better known than their action figures. It was recently revealed they have an entirely new Romulan Bird of Prey on the way, and will also be re-issuing and updating the Enterprise NX-01 for the first time in about a decade. There are no dates for those yet, but also due out soon is their updated version of the USS Enterprise-A, and according to their most recent ship dates list they will also be re-releasing the HD version of the original USS Enterprise.