Star Trek construction toys on the way from Mega Bloks 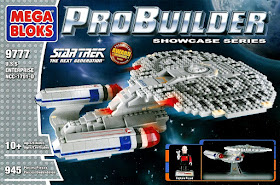 Mega Bloks, Mattel's Lego-compatable construction toy range, is to launch a new range of Star Trek toys next year. That will mark a return of Star Trek to Mega Bloks, more than a decade since they last produced a single set, the USS Enterprise-D (pictured). There's no news yet about what subject will be featured in the new sets, but they were specified, in the press release, as a limited edition release, and will form part of Mega Bloks Collectors range, for more mature builders, which currently includes sets based on Halo, Assassins Creed, Call of Duty, and World of Warcraft.

The news came with the announcement of several new lines from Mega Bloks, curiously mostly featuring brands that have until recently been held by other construction toy companies. As well as expanding their existing Power Rangers license, next year will also see the launch of  Teenage Mutant Ninja Turtles (previously held by Lego), and sets based on the new Terminator film, Genisys (Best Lock have previously produced sets based on that franchise). 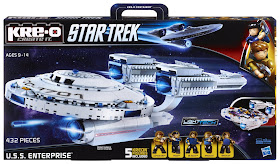 Star Trek's own brick-built history indeed began with that single Mega Bloks set, but more recently had a much larger range from Hasbro's Kreo-O. Those sets were mostly based on Into Darkness, although there were a handful of releases inspired by the wider Star Trek universe. It has not been specified whether the new range will focus on the new movie due out next year, or also incorporate other parts of the franchise - One would certainly imagine anyone with a Star Trek license will be seeking to capitalise on the fiftieth anniversary next year!

I believe Hasbro has dropped Star Trek on the whole, so I would also anticipate news of other toy licenses to come some time this year, ready to produce action figures, props, and model ships based on the new movie.