IDW Star Trek comics for May

IDW have released their solicitations for May, which include two new Star Trek stories, which oddly will find bother timeline's versions of Kirk and company on missions in the Delta Quadrant! Continue below for all the details.

Yup, that is surely the shortest blurb ever! You can see the first couple of pages of this issue in one of my previous reports. Here's the updated cover (compare to the version Byrne previously teased): 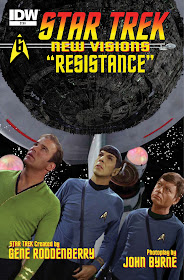 
“Eurydice, Part 3 of 3.” Trapped deep in the Delta Quadrant, Captain Kirk and the crew of the Enterprise fight for their lives to escape the clutches of the Dark Market syndicate! Don't miss this all-new adventure produced in association with STAR TREK writer/producer Roberto Orci!

There are two covers for this one, the regular by Joe Corroney (which features an intriguing quantity of Vulcan stuff), and the subscription variant photo-cover: 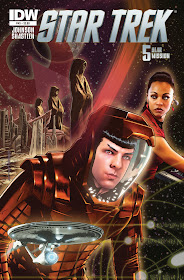 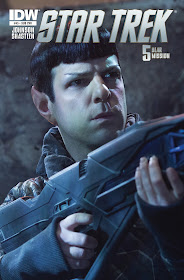 For listings of all the latest Star Trek comics, hit the comics button on my 2015 schedule pages, where you'll also find links to all my previous coverage.